Sidhu Moose Wala was gunned down near his village Mansa in Punjab, a day after security was scaled down by state government. 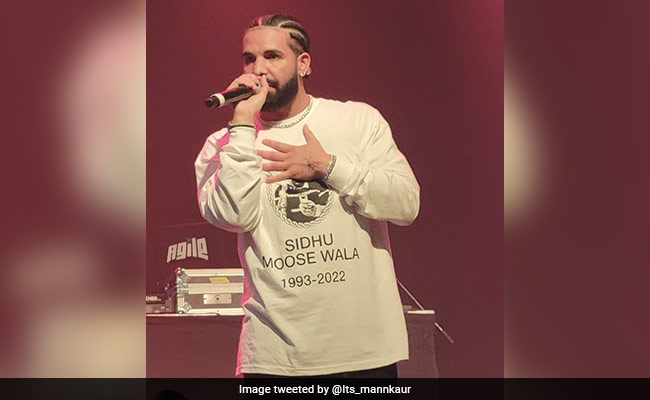 Canadian Rapper Drake paid tribute to singer Sidhu Moose Wala by wearing a t-shirt with a picture of him at a concert in Toronto. Drake was performing at a warm-up concert ahead of his upcoming OVO Fest Tour in the Canadian city where he arrived wearing the white t-shirt. The event took place on Thursday at History, a new venue in Toronto. In the video going viral on social media, a huge crowd is seen capturing the photos and videos of Drake as he starts his show. Moose Wala, the 28-year-old singer from Punjab, was shot dead two months ago.

"I'm here tonight, grateful, just as a kid who grew up wide-eyed. I'm a fan, I'm one of you tonight. I'm grateful to be from the greatest city in the world," Drake said as the crowd cheers. The video has been viewed thousands of times on various social media platforms.

Many users on Instagram and Twitter appreciated the gesture shown by Drake to pay tribute to Moose Wala. "Respect for Drake," a Twitter user said. "This shows a relationship that Drake had with Sidhu Moose Wala," commented another.

After Moose Wala's killing in May this year, Drake remembered the Punjabi singer by posting an Instagram story in his honour. In 2020, Drake had made headlines when he started following Moose Wala on Instagram.

Moose Wala, who counted Drake as one of his music influences and followed him on social media, was a regular performer at live shows in Canada.

Meanwhile, Moose Wala's father Balkaur Singh too paid an emotional tribute to the singer by getting his son's face tattooed on his arm. An Instagram story on the popular rapper's official Instagram page showed his father lying on a bed and a tattoo artist copying a picture of Moose Wala from a phone, inking it on Mr Singh's forearm in black.

Sidhu Moose Wala was gunned down near his village Mansa in Punjab, a day after his security was scaled down by the Bhagwant Mann government.

Balkaur Singh was following his son in a car with two armed personnel when the killers rained bullets on the singer and his two friends.