In the video, the man is seen sporting Johnny Depp's hairstyle and goatee along with matching shades while taking part in the solemn ceremony. 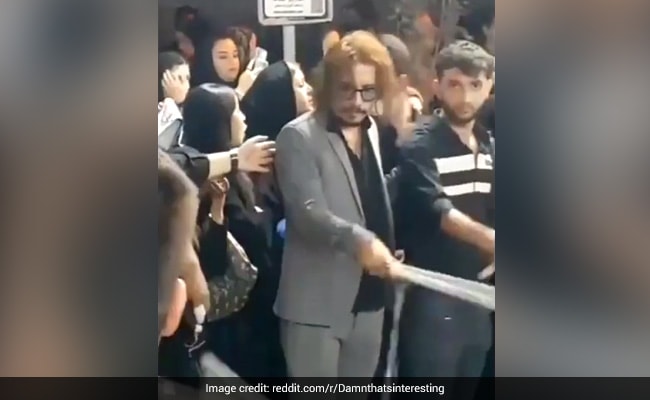 Johnny Depp's doppelganger is a model in Iran, according to local media.

An Iranian man has gone viral on social media for his striking resemblance to Hollywood actor Johnny Depp. The man was taking part in a religious ceremony in Iran's Tabriz where his video was taken and it first appeared on TikTok. The footage later started circulating on other platforms like Reddit where thousands of people were amazed to see Mr Depp's lookalike. Local media identified the man as Amin Sa'les, who the reports said, is a model, according to Newsweek.

In the video, the man is seen sporting Mr Depp's distinct hairstyle and goatee along with matching shades while taking part in the solemn ceremony.

The video also shows him raising ceremonial sticks as part of a ritual.

Users also found an Instagram account, which they claim belongs to Sa'les (username @dr.aminsales). It has been full of comments from people who talk about his appearance.

The handle has many photos of the man from photo shoots in which he has posed like the 'Pirates of the Carribbean' star.

Meanwhile, commenting on his now-viral video circulating online, many users wondered if Mr Depp had abandoned Hollywood following his legal battle with ex-wife Amber Heard and ran away to Iran.

"He left his doppelganger back in the states to fool everybody," a Reddit user said while commenting on the video. "Johnny Duped," added another.

"He's learning how to fend off Amber," a third user said.

In June, another lookalike of Mr Depp went viral from Stockholm with over 2 million views on TikTok and other platforms.

After winning the defamation case against his ex wife, Mr Depp has started working on his next project in which he is playing the role of controversial King Louis XV. His first look from director Maiwenn's historical love story "Jeanne du Barry" was released by a French production house last week.