The Tempe Police informed that the accident was caused after the driver inadvertently stepped on the gas instead of the brake pedal. 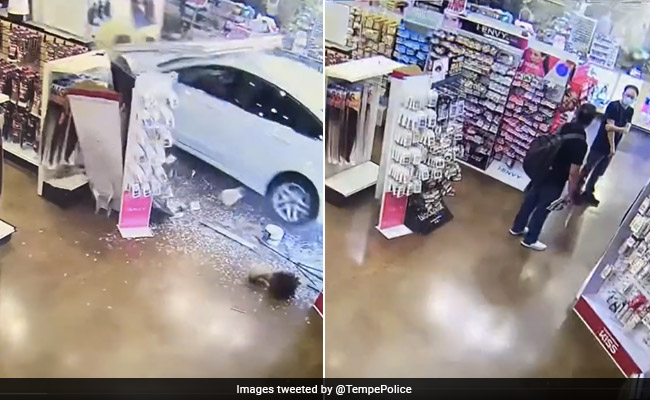 The driver won't face any criminal charges for the crash.

Minor injuries were reported after a car accidentally drove into a retail store in Tempe, US, on Thursday. Nail-biting footage of the incident, uploaded by the Tempe Police, shows two men chatting inside the shopping mart when all of a sudden a white sedan plows through the storefront and hits the victims before crashing through the shopping aisles. The video concludes with the car stopping and then reversing to the entrance of the store.

Watch the horrifying surveillance clip below:

Wow check out this close call!! The driver accidentally left the car in drive and tries to put it in park and unintentionally hit the accelerator. Thankfully only minor injuries! pic.twitter.com/03OWUN9o6c

According to 12News, the two men were pushed by the car around 25 feet inside the store. Both were taken to the hospital with minor injuries. The Tempe Police informed that the accident was caused after the driver inadvertently stepped on the gas instead of the brake pedal.

“It was just so quick,” described an anonymous sales representative, who got hit by the car. “The wall came to us,” he added. Separately, speaking to ABC15, the sales associate also said that “it felt like an earthquake.”

The sales rep informed that he is recovering from cuts on his head, arms and legs, and also got five stitches in his hand. The employee is still in the hospital but is expected to be okay. The driver, on the other hand, won't face any criminal charges for the crash, however, they were arrested for an unrelated warrant.

The sales rep, for once, is just grateful that everyone survived.

Speaking to 12News, Bok Park, the store owner, said that he expects the store to be closed for about a week for repairs. He said that he hopes to open the store sooner but the crash caused a domino effect which damaged some inventory and knocked out thousands of items.