A young man died Friday after he was injured in violence as looting broke out in impoverished Venezuelan cities, an official said, bringing the toll from unrest in more than a month of anti-government protests to at least 36. 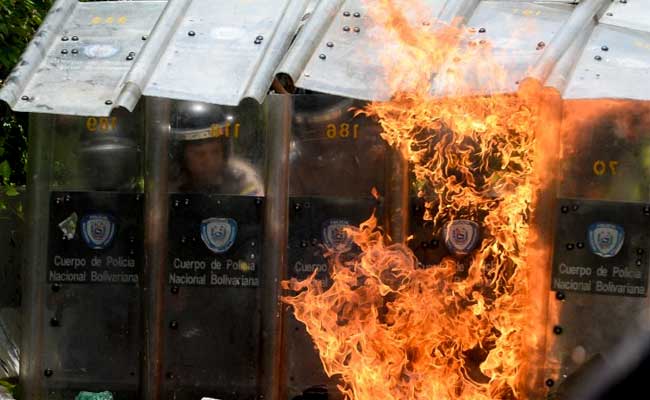 Valencia, Venezuela: A young man died Friday after he was injured in violence as looting broke out in impoverished Venezuelan cities, an official said, bringing the toll from unrest in more than a month of anti-government protests to at least 36. Hecder Lugo Perez, 22, died after he was hit in the head by a projectile in the northwestern city of Valencia, sources at the Valles de San Diego medical clinic said. City Mayor Enzo Scarano confirmed his death. Mass protests erupted on April 1 by demonstrators demanding elections to remove President Nicolas Maduro. They blame him for an economic crisis that has caused shortages of food, medicine and other basics.

Anger boiled over Friday in the western municipality of Rosario de Perija, where young protesters burned, pulled down and then smashed a statue of former president Hugo Chavez, Maduro's late predecessor and mentor, according to video posted on social media showing the incident in a public square.

Looting broke out this week in cities such as Valencia, which looked like a disaster zone with bars on shop windows bent and windows broken.

"There was a crowd of them. They broke through the walls and took everything. They destroyed everything" before police came and fired tear gas to disperse the looters, said Nuvia Torrealba, 42, who worked in a bakery.

"My bosses have lost their home and we are out of a job. It was horrible."

Residents were stockpiling food, water and fuel. At least 70 stores have been raided since Tuesday, the Valencia chamber of commerce said.

"They are taking advantage of the protests to go out and rob," said Magaly Oliveros, a 64-year-old housewife in Valencia.

"Today we are hungry, and tomorrow we will be hungrier still because there is nothing."

Each side accuses the other of using armed groups to sow violence in the demonstrations.

Maduro has the public backing of the military high command, which analysts say is key to resisting the protests.

However, senior opposition leader Henrique Capriles said on Friday that 85 mid-ranking army officers have been detained for opposing moves to crack down on protesters.

He cited information he said was given by the officers' families.

Maduro's opponents called for women to march on Saturday dressed in white, a traditional show of defiance against what they brand a repressive government.

"The regime is falling," said Lilian Tintori, wife of jailed opposition leader Leopoldo Lopez, outside the prison near Caracas where she was demanding to see her husband.

"It has no strength and is showing its worst side, using weapons because it is does not have right on its side."

The president has launched moves to reform the constitution, further angering the opposition, which says he is trying to dodge elections.

He says the economic crisis is a US-backed conspiracy to topple him and install a right-wing government.

"We will not let a fascist regime be set up here," said Elias Jaua, the official appointed to lead a presidential commission on the constitutional reforms.

Capriles said the opposition will take no part in the constitutional discussions.

The celebrity Venezuelan conductor Gustavo Dudamel, director of the Los Angeles Philharmonic, added his voice to calls for an end to the violence on Thursday.

He called for Maduro to "listen to the voice of the Venezuelan people", in a message posted on Facebook.

(This story has not been edited by NDTV staff and is auto-generated from a syndicated feed.)
Comments
Venezuela CrisisVenezuela protests