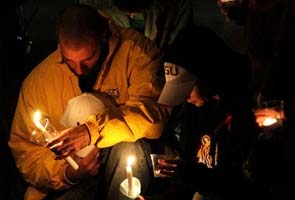 Midland City: This town of 2,400 nestled amid peanut farms and cotton fields has long relied on a strong Christian faith, a policy of "love thy neighbour," and the power of group prayer.

Those beliefs have been strongly in evidence in the six days since a gunman killed a school bus driver, snatched a 5-year-old boy off a bus full of youngsters and fled with his hostage to an underground bunker.

Police say 65-year-old Jim Dykes killed 66-year-old Charles Albert Poland J. before escaping with the kindergartener, who has Asperger's syndrome and attention deficit hyperactivity disorder, according to a state lawmaker who has spent time with his mother.

On Sunday, more than 500 people filed into the Civic Centre in the nearby town of Ozark to pay their final tribute to Poland, whom they hailed as a hero for protecting the other children on the bus before he was gunned down and the little boy grabbed.

Fliers imploring people to pray for the little boy were stuck onto the chain-link fence outside of the Midland City Elementary School, where he is enrolled. The fence also has been adorned with black, white, and red ribbons.

Residents have gathered for candlelight vigils on a nightly basis to pray for the child. And people are hopeful the hostage drama will lead to a renewed faith in God and to a closer-knit community.

"This has drawn a lot of people closer to Christ," said Midland City Mayor Virgil Skipper. "When you get something like this, it always changes things."

Skipper described Midland City as a place where people work, pray and spend time with their families. He said the only other event that shook up the town this badly was in 1963, when a train crashed into a station wagon in the middle of town and 11 members of the same family were killed. Only a 1-year-old girl survived.

"That was the worst thing I can recall, until this," Skipper said.

In a community where neighbourly love appears to be the guiding force, the bus driver's death and little boy's kidnapping have both rattled and saddened residents.

"We're devastated this could happen here. We don't know what to think," said Winifred Ramsey, 77, a retired insurance agent who has lived in Midland City since she was 12. "We never thought anything like this would happen. We're just slow-paced and love our neighbours."

Taylor Hodges, the pastor of the Midland City Baptist Church told his congregation on Sunday that, "We're grieving the loss of a way of life here in Midland City. That's what it feels like to a lot of people here."

Despite the trauma, community members had not forgotten their Southern hospitality - and it seemed to be catching.

Across a busy highway from the dirt road leading to Dykes' house, members of a nearby church cooked barbecue for the news media over the weekend.