Hundreds Of Homes Feared Lost In "Life-Threatening" US Colorado Wildfires

US Colorado Wildfire: At least 1,600 acres have burned in Boulder County, much of it suburban, with warnings that deaths and injuries were likely as the blaze takes hold of hotels and shopping centers. 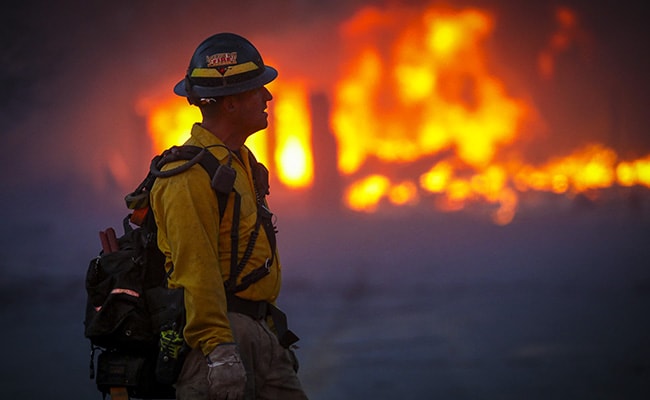 US Colorado Wildfire: Hundreds of homes are feared lost in wildfires in the US state of Colorado.

Hundreds of homes are feared lost in fast-moving wildfires in the US state of Colorado, officials said Thursday, as flames tore through areas desiccated by a historic drought.

At least 1,600 acres have burned in Boulder County, much of it suburban, with warnings that deaths and injuries were likely as the blaze took hold of hotels and shopping centers in the town of Superior.

"We know that approximately 370 homes in the Sagamore subdivision... have been lost. There's a potential of 210 homes lost in Old Town Superior," Boulder County Sheriff Joe Pelle told a news conference.

"I'd like to emphasize that due to the magnitude and intensity of this fire and its presence in such a heavily populated area, we would not be surprised if there are injuries or fatalities."

The Colorado Sun newspaper reported that a number of people had been treated for burns, with at least six patients at one hospital.

Photographs posted on Twitter showed huge flames looming over what appear to be ranks of houses.

One video shows a fire in a parking lot, with trees and grass ablaze, as strong wind pushes smoke around.

Thousands of people have been told to flee the fast-moving fire, which is thought to have begun when power lines were toppled by gusting winds.

Patrick Kilbride, 72, was at work in a hardware store when he heard the order to evacuate, The Denver Post reported.

He raced home to gather his possessions, but was unable to save anything other than his car and the clothes he was wearing.

His dog and cat both perished.

"It's ashes," he said of the home he has lived in for three decades.

"It's not a house. If you need a fireplace chimney, that's all that's left.

"It's just a strange feeling to go from having everything to make your life comfortable to having nothing," he said.

The 20,000-strong town of Louisville, along with the 13,000 residents of Superior, have been told to get out, with the National Weather Service describing the situation as "life-threatening."

Wind gusts of over 100 miles (160 kilometers) an hour have been reported in some places, fanning the flames and complicating firefighting efforts by preventing aircraft from taking to the skies.

Colorado Governor Jared Polis declared a state of emergency, over what he said was a devastating fire.

Unlike previous blazes in the state, he said, this one is not in the countryside; it is where people live.

"This area is right in and around suburban sub-developments, stores," he said.

Like much of the American West, Colorado is in the grip of a years-long drought that has left the area parched and vulnerable to wildfire.

Although fires are a natural part of the climate cycle, and help to clear dead brush and reduce disease in vegetation, their scale and intensity is increasing.

This prolongs droughts in some areas and provokes unseasonably large storms in other places, phenomena that are expected to get worse as worldwide average temperatures continue to climb.

Daniel Swain, a meteorologist at the University of California, tweeted that it was "hard to believe" these fires were taking hold in December, usually a quieter time for blazes.

"But take a record warm & dry fall, only 1 inch of snow so far this season, & add an extreme (100mph+) downslope windstorm...and extremely fast moving/dangerous fires are the result."