US Warships Pass Through Taiwan Strait Amid Tensions With Beijing

China has regularly said that Taiwan is the most sensitive issue in its ties with the United States. 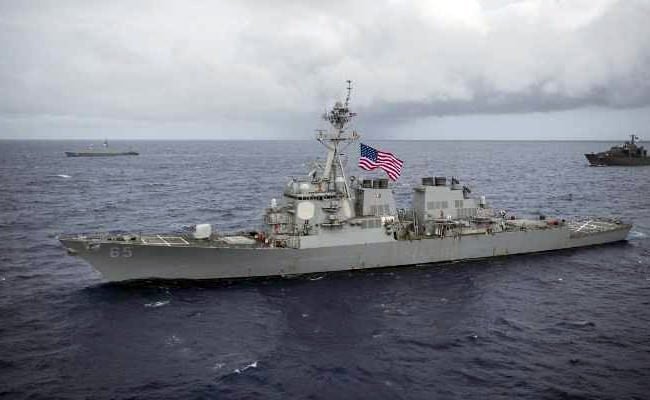 Two US warships passed through the Taiwan Strait on Saturday on a voyage that will likely be viewed in the self-ruled island as a sign of support by President Donald Trump amid heightened tension with China.

"Two US Navy ships conducted a routine transit through the international waters of the Taiwan Strait on July 7-8 (local time)," Captain Charlie Brown, a spokesman for U.S. Pacific Fleet, told Reuters in a statement.

"US Navy Ships transit between the South China Sea and East China Sea via the Taiwan Strait and have done so for many years," Brown said.

US officials, speaking on condition of anonymity, said the destroyers Mustin and Benfold carried out the passage.

Earlier on Saturday, Taiwan's Defense Ministry said the ships were moving in a northeastern direction, adding that the situation was in accordance with regulations.

Washington has no formal ties with Taiwan but is bound by law to help it defend itself and is the island's main source of arms. China regularly says Taiwan is the most sensitive issue in its ties with the United States.

The passage through the Taiwan Strait, the first such one by a US Navy ship in about a year, follows a series of Chinese military drills around the island that have stoked tensions between Taipei and Beijing.

"The US is aggravating Taiwan Strait tensions," state-controlled Chinese tabloid The Global Times, which is run by the People's Daily, said on Twitter.

"The PLA Navy must have monitored the situation and has it under control, a military affairs expert said after two US Navy vessels sailed through the Taiwan Strait on Saturday," it added.

China claims Taiwan as its own and has never renounced the use of force to bring under its control what it sees as a wayward province. Taiwan has shown no interest in being governed by the ruling Communist Party in Beijing.

The move comes as a US-China trade fight is seen as dragging on for a potentially prolonged period, as the world's two biggest economies flex their muscles with no sign of negotiations to ease tensions.

Reuters first reported last month that the United States was considering sending a warship and had examined plans for an aircraft carrier passage, but ultimately did not pursue that option perhaps because of concerns about upsetting China.

The last time a US aircraft carrier transited the Taiwan Strait was in 2007, during the administration of George W Bush, and some U.S. military officials believe a carrier transit is overdue.

US overtures towards Taiwan, from unveiling a new de facto embassy to passing the Taiwan Travel Act, which encourages US officials to visit, have further escalated tension between Beijing and Taipei.

US Defense Secretary Jim Mattis discussed the delicate issue of Taiwan during his trip to China last month.

"The U.S. sending military ships through the Taiwan Strait is both a demonstration of its continuing support to Taiwan and of its willingness to exercise its maritime rights in China's periphery," said Abraham Denmark, a former deputy assistant secretary of defense for East Asia under President Barack Obama.

China has alarmed Taiwan by ramping up military exercises this year, including flying bombers and other military aircraft around the island and sending its carrier through the narrow Taiwan Strait separating it from Taiwan.

In recent months, China's air force has held military maneuvers near the island, which Taipei has called intimidation.

China's hostility toward Taiwan has grown since Tsai Ing-wen from the pro-independence Democratic Progressive Party won presidential elections on the island in 2016.