US War Reporter Sotloff Remembered as Brave and Fun 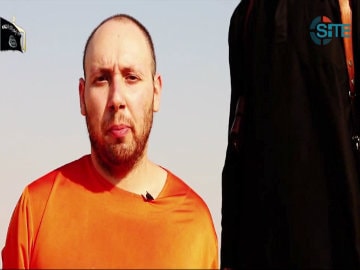 An image grab taken from a video released by the Islamic State (IS), purportedly shows Steven Sotloff. (AFP)

Washington: Steven Sotloff, the second US journalist murdered by Islamic State militants, was a respected reporter as well known for his irreverent humor as for his sensitive approach to Middle East conflicts.

"He is a journalist who made a journey to cover the story of Muslims suffering at the hands of tyrants," Sotloff's mother, Shirley said in a last ditch appeal for mercy last week.
<divid='ndtvrelcontent'></div>
"I ask your justice to be merciful and not punish my son for matters he has no control over," she said.

In a video showing the beheading of fellow US journalist James Foley, militants had warned Sotloff would be next if President Barack Obama did not halt raids against the Islamic State in Iraq.

On Tuesday, a video released by the same jihadist group showed the murder of 31-year-old Sotloff, just over a year after he had been taken captive while crossing the frontier from Turkey to Syria.

Well versed in the history and culture of the Middle East, the self-styled "stand-up philosopher from Miami" wrote for Time, the Christian Science Monitor, Foreign Policy and World Affairs Journal.

Sotloff "is known to us as an honest and thoughtful journalist who strives to understand the story from local perspectives and report his findings straightforwardly," World Affairs said last month.

Foreign Policy editor David Kenner said he would remember Sotloff "as a brave and talented reporter" while colleague Tom Coghlan recalled him as "a really good writer and humane journalist."

Friends also shared intimate memories, with an academic who tweets under the name Ms. Entropy describing him as a "dear friend, smartass, hilarious comrade, and brave colleague."

'Courage and little bit of craziness'

Before his kidnap, the journalist posted poignant images on social media sites of civilians in the grips of conflict beyond their control, including children in a Syrian refugee camp.

On Twitter, he spoke of the conflict in Syria and the Arab Spring popular revolts in countries like Egypt and Libya but also his favorite basketball team, the Miami Heat.

"Steven embodies what it takes to report from combat zones," said Bill Roggio, managing editor of the Long War Journal, a news website for which Sotloff wrote in 2011 from Cairo.

"He has that courage and little bit of craziness that you need to take risks to observe and understand a story in dangerous places."

Speaking to The Miami Herald before the apparent beheading, she insisted that Sotloff was "no war junkie."

He was, she said "committed to the Arab Spring and very respectful of Islamic culture."

"I can't get the image of Steve Sotloff cracking jokes out of my head. We can NOT let # ISIS win by instilling fear, stopping our work," tweeted Newsweek's Middle East editor Janine di Giovanni, who worked with him in Syria.

Other colleagues urged the public to remember Sotloff through his work and not through the video of his violent death.

"Let us stop and honor and remember and talk about Steven Sotloff.

Let us discuss his humanity -- and reject those who refused to see it," Al Jazeera America foreign correspondent Nick Shifrin tweeted.

"He said he was chasing a good story, but kept the specifics close to his chest," Taub wrote in The Daily Beast in August.

Promoted
Listen to the latest songs, only on JioSaavn.com
"He was experienced. He could speak Arabic. He was careful. And he told me he had had enough."