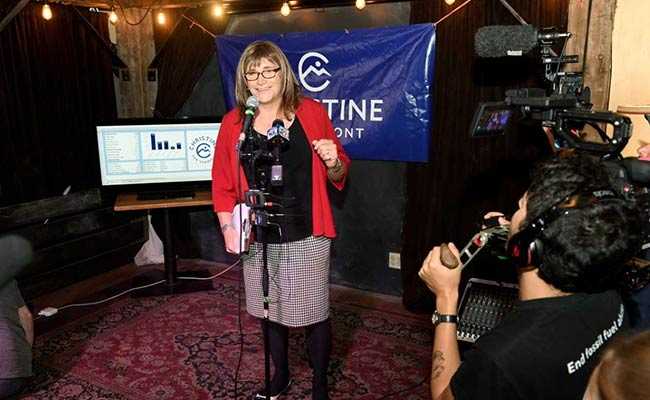 Christine Hallquist won the Democratic gubernatorial nomination in the US state of Vermont on Tuesday, moving a step closer to becoming the nation's first transgender governor, US media reported.

But she still faces an uphill battle in the general election, when she is projected to face Republican incumbent Phil Scott, who has been in office since 2016.

In 2015, "Christine made the decision, after years of holding it inside, to come out as her true self, a transgender woman, becoming the first business leader in the country to transition while in office," according to her campaign's website.

"Working to ensure that Vermont remains the special, inclusive and progressive place that it has always been... is what motivates Christine to seek the honor and opportunity to serve the people of Vermont as its next governor," it says.

Hallquist beat out James Ehlers, a Navy veteran and environmentalist, and Brenda Siegel, the executive director of a dance festival, to win the Democratic nomination.

Also among the primary candidates was 14-year old schoolboy Ethan Sonneborn, who took advantage of a quirk in the constitution of the bucolic northeastern state that imposes no age limit on running for governor.

His website proclaims him a champion for middle- and working-class families, with "the right ideas" on healthcare reform, economic development and education -- never mind that he's still years from graduating high school.

But despite praise for Sonneborn's "maturity" and political awareness, his campaign attracted calls for Vermont lawmakers to close the loophole.

"I think we should probably take a look at that to be perfectly honest," Governor Scott told reporters when asked if he thought 14-year-olds should be eligible to run.

"I think you should at least be able to get your driver's license at the time that you become governor."

(Except for the headline, this story has not been edited by NDTV staff and is published from a syndicated feed.)
Comments
Christine Hallquistfirst transgender governorUS