US Readies To Slap Duties On $16 Billion Of Chinese Goods

Donald Trump has suggested he may tax effectively all imports of Chinese goods, which reached more than $500 billion last year. 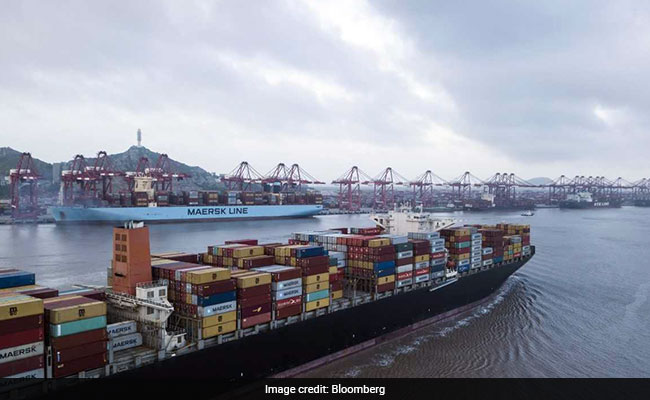 The U.S. said it will begin imposing 25 percent duties on an additional $16 billion in Chinese imports in two weeks, escalating a trade war between the world's two biggest economies.

Customs will begin collecting the duties on 279 product lines, down from 284 items on the initial list, as of Aug. 23, the U.S. Trade Representative's Office said in an emailed statement on Tuesday. The new list covers products ranging from motorcycles to steam turbines and railway cars.

It will be the second time the U.S. slaps duties on Chinese goods in about the past month, despite complaints by American companies that such moves will raise business costs and eventually consumer prices. The U.S. levied 25 percent duties on $34 billion in Chinese goods on July 6, prompting swift in-kind retaliation from Beijing. China has vowed to strike back again, dollar-for-dollar, on the $16 billion tranche.

The total could increase soon. The USTR is reviewing 10 percent tariffs on a further $200 billion in Chinese imports, and is even considering raising the rate to 25 percent. Those duties could be in place after a comment period ends on Sept. 6.

President Donald Trump has suggested he may tax effectively all imports of Chinese goods, which reached more than $500 billion last year.

A U.S.-China trade war will reduce global output by 0.7 percent by 2020, with China's economy taking a 1.3 percent hit and U.S. GDP dropping 1 percent, Oxford Economics said in a research note Tuesday, before the new list was released. While there's no major risk of the world lapsing into "damaging stagflation," the possibility remains of a "bigger blow-up" that sharply reduces trade, as in the 1930s, it said.

Among the products removed from the earlier list on $16 billion of imports were shipping containers, including those used by freight companies. Schneider National Carriers Inc. and other firms testified during a hearing July 24-25 in Washington that there are no U.S. manufacturers and that the containers are almost exclusively made in China.

Also removed were splitting, slicing or paring machines. Joseph Cohen, chief executive officer of New Jersey-based Snow Joe LLC, which makes log splitters, had asked that they be taken off the list.

The final list did not remove tariffs on fertilizer distributors, which Jane Hardy, chief executive officer of Brinly-Hardy Co. In Indiana, testified on July 24 could be the "nail in our coffin" for her firm after 179 years in business.

Over the weekend, Trump said he had the upper hand in the trade war, while Beijing responded through state media by saying it was ready to endure the economic fallout.

The U.S. and China have been trying to restart high-level talks that broke off after Trump followed through on his tariff threats. Representatives of Treasury Secretary Steven Mnuchin and Chinese Vice Premier Liu He are having private conversations as they look for ways to reengage in negotiations, according to two people familiar with the efforts.

The two sides held three rounds of formal talks, beginning with a delegation to Beijing led by Mnuchin in May. After Liu visited Washington later that month, the nations released a joint statement pledging to reduce the U.S. trade deficit with China, among other things. But within days, Trump himself backed away from the deal, saying talks would "probably have to use a different structure."

Negotiations broke off after the Trump administration imposed the tariffs on $34 billion in Chinese imports, a move the Chinese said would void any promises they'd made in negotiations.

Trump's mission to reduce the U.S. trade deficit via the threat of tariffs has brought him into conflict with China as well as U.S. allies, roiling financial markets and raising fears of a global trade war the International Monetary Fund has warned may undermine the strongest economic upswing in years.

(Except for the headline, this story has not been edited by NDTV staff and is published from a syndicated feed.)
Comments
US Tarrifs On ChinaChinese ImportsUS China Relations