US To Introduce Bill Urging China Sanctions Over Crackdown In Xinjiang

Trump's senior aides recently have become more vocal in their criticism of China's treatment of its minority Muslims in Xinjiang, which has sparked an international outcry. 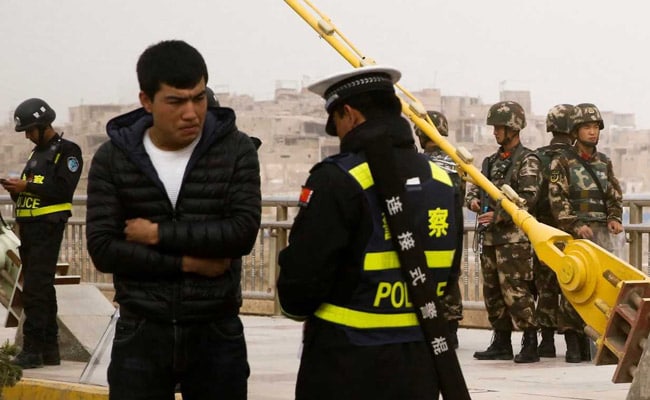 Far western Xinjiang faces a threat from Islamist militants and separatists, China has said in the past.

US lawmakers will introduce legislation on Wednesday urging a stronger response by the Trump administration to China's crackdown on minority Muslims, including possible sanctions against a senior official, a move China decried as hypocrisy.

The legislation will also ask President Donald Trump to condemn China's actions in its western region of Xinjiang, call for a new "special coordinator" of US policy on the issue and seek consideration of a ban on export of US technology Beijing could use in surveillance and mass detention of ethnic Uighurs, according to a copy of the measure seen by news agency Reuters.

The lawmakers want the Trump administration to consider human rights-related sanctions against Xinjiang Party Secretary Chen Quanguo, who is also a member of the powerful politburo, and other officials "credibly alleged to be responsible" for the security crackdown, the measure will say.

"Chinese government officials should be held accountable for their complicity in this evil and US businesses should be barred from helping China create a high-tech police state in Xinjiang," said Republican US Representative Chris Smith, one of the sponsors of the bipartisan legislation to be presented in both the Senate and House of Representatives.

The White House did not immediately respond to a request for comment on the bill, which is also being put forward by Republican Senator Marco Rubio and Democratic Senator Bob Menendez.

In Beijing, Chinese Foreign Ministry spokeswoman Hua Chunying said the United States and its lawmakers had no right to interfere in other countries, considering their own racial problems.

"It's too strange, they always selectively overlook the various problems their own country is facing, zealously interfering in other countries' internal affairs, moreover based on wrong information and with strong ideological prejudice," she told a daily news briefing.

Hua cited statistics on the higher rate of miscarriages of justice for African Americans versus their white counterparts and the economic disadvantages facing minority groups.

"I hope US lawmakers can care a bit more about domestic US matters, and do their job a bit better," she added.

Trump's senior aides recently have become more vocal in their criticism of China's treatment of its minority Muslims in Xinjiang, which has sparked an international outcry.

Any sanctions, however, would be a rare move on human rights grounds by the Trump administration against China, with which it is engaged in a bitter trade war.

Beijing has dismissed accusations of abuses in Xinjiang, urging the United States and other countries to stay out of its internal affairs.

The Chinese government's top diplomat said on Tuesday the world should ignore "gossip" about developments in Xinjiang and trust authorities there, when asked if Beijing would allow international observers to inspect camps for Muslims in the region.

Western countries including Canada, France, Germany, and the United States have urged China to shut down camps in Xinjiang, where activists say as many as 1 million members of the Uighur minority and other Muslims are being detained.

Far western Xinjiang faces a threat from Islamist militants and separatists, China has said in the past.

Rubio said in a statement that some Chinese officials were responsible for "possible crimes against humanity."

For several months, the Trump administration has been weighing sanctions against Chinese officials and companies operating in Xinjiang, US officials have said on condition of anonymity.

The new bill calls for consideration of measures under the Global Magnitsky Act, which hits rights violators with freezes on US assets, US travel bans, and prohibitions on Americans doing business with them, and also under a federal law to target those involved in religious repression around the world.

It will urge the administration to report back to Congress on Chinese companies involved in the camps and ask the FBI to act against any Chinese government efforts to intimidate Uighurs living in the United States.

(Except for the headline, this story has not been edited by NDTV staff and is published from a syndicated feed.)
Comments
XinjiangChina US RelationsUS Sanctions on China