US Abandons Efforts To Work With Russia On Syria 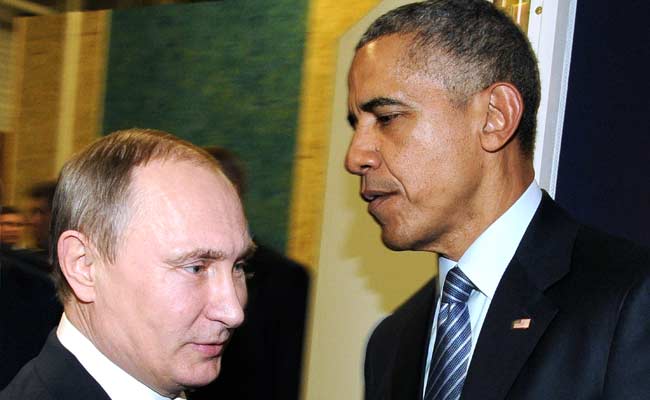 US suspended the combined effort with Russia on Syria cease-fire. (File Photo)

U.S.-Russia relations fell to a new post-Cold War low Monday as the Obama administration abandoned efforts to cooperate with Russia on ending the Syrian civil war and forming a common front against terrorists there, and Moscow suspended a landmark nuclear agreement.

The latter move, scuttling a deal the two countries signed in 2000 to dispose of their stocks of weapons-grade plutonium, was largely symbolic. But it provided the Kremlin with an opportunity to cite a series of what it called "unfriendly actions" toward Russia - from Ukraine-related and human rights sanctions to the deployment of NATO forces in the Baltics.

The United States, the Russian foreign ministry said in a statement, has "done all it could to destroy the atmosphere encouraging cooperation."

Of far more immediate concern, the end of the Syria deal left the administration with no apparent diplomatic options remaining to stop the carnage in Aleppo and beyond after the collapse of a short-lived cease-fire deal negotiated last month.

The State Department announced that it was withdrawing U.S. personnel who have been meeting in Geneva over the past several weeks with Russian counterparts to plan coordinated airstrikes against al-Qaida and Islamic State terrorists in Syria. The coordination was to start as soon as a cease-fire, begun Sept. 12, took hold and humanitarian aid began to flow to besieged communities where civilians have borne the brunt of Russian-backed President Bashar al-Assad's response to a five-year effort to oust him.

The Syria agreement was part of a year-long effort spearheaded by Secretary of State John Kerry to persuade Russia to help bring a negotiated political end to the war. In exchange for using its leverage with Assad to ground his air force and allow aid to flow, the United States said it would work to separate U.S.-backed opposition groups from terrorist forces with which they have become increasingly intertwined.

Instead, after just a few days of a fitful truce, both Syria and Russia stepped up their bombing attacks in Aleppo and elsewhere in the country, including the destruction of an aid convoy. Russia, while denying the convoy attack, has justified its airstrikes by saying that the cease-fire - along with U.S. failure to disengage the opposition from the Front for the Conquest of Syria, the al-Qaida group formerly known as Jabhat al-Nusra - allowed the terrorists to rearm and expand their territory.

Russia's version of the sequence of events mandated by the deal is "explicitly not true," a senior administration official said. "Separation was not step one," but was supposed to occur after seven days without major violence. The Russians, the official said, have "constantly tried to move the goal posts."

The Damascus government officially declared the truce over on Sept. 19. Since then, Syrian and Russian aircraft have carried out a massive barrage from the air over Aleppo, including what a U.S. intelligence official said were "barrel bombs, thermobaric bombs, incendiary munitions, cluster bombs and bunker busters."

Unrelenting strikes, many of them targeting hospitals and medical facilities, have "killed hundreds of children in a week's time," said the intelligence official, one of several who spoke on the condition of anonymity under administration-imposed rules to discuss the Syrian conflict.

Kerry said last week that the United States was "on the verge" of suspending the Syria agreement. "The decision today came after a long, deliberate period of trying to give them every benefit of the doubt," the senior administration official said. "But when they're targeting hospitals, and using these kinds of weapons, that's not a misunderstanding."

"It doesn't mean we've shut the door . . . if the Russians are willing to get serious about implementing" the deal, this official said, although there is virtually no optimism that the agreement can be revived.

But in a series of internal meetings over the past week, the administration has found no alternative that has not already been considered, and previously discarded as unworkable or too risky in terms of broadening the Syrian conflict. President Barack Obama is said to be no more willing to involve U.S. forces, air or ground, in the conflict than he was when it began five years ago. The prospect of flooding the opposition with more, and better, arms is still seen as hazardous.

"Anything we do in the near term could lead to additional" expansion of the war, a second senior administration official said. "There are consequences" to a military approach, the official said, and we "want to make sure we are clear-eyed about them."

At the same time, this official said, the United States will continue to protect its interests against terrorist expansion. The official cited a recent U.S. airstrike in Syria's Idlib province - an area of frequent Russian and Syrian strikes that targeted Front leader Ahmed Salama Mabrouk. The Pentagon confirmed the strike but did not confirm the Front's announcement that Mabrouk had been killed.

Officials said they considered Syria and the plutonium suspension distinct issues, although both are "part of a piece of a troubled and difficult relationship," one senior official said.

"It's certainly the worst period between the two countries since the Cold War . . . it's obvious that things have been deteriorating across the board," said Philip Gordon of the Council on Foreign Relations and a former assistant secretary of state for European and Eurasian affairs under Obama.

In a decree released by the Kremlin, Russian President Vladimir Putin said Moscow would consider a resumption of the nuclear accord only if Washington agreed to several conditions, including canceling all sanctions and compensating Moscow for losses resulting from them.

The plutonium agreement was once hailed as an example of successful U.S.-Russian cooperation. Signed in 2000 and updated in 2010, it required both countries to dispose of 34 tons of weapons-grade plutonium, enough to make approximately 17,000 nuclear weapons, according to the State Department.

Russia had soured on the deal over differences with the United States on how to dispose of the plutonium. Moscow said it has opened a plant that converts the weapons-grade material into fuel know as MOX, which can be used in commercial reactors; construction of a similar U.S. plant in South Carolina has been plagued by delays and cost overruns.

The U.S. side has been split between those who want to build a plant as a way to encourage the Russians, and those who think it safer and cheaper to dilute the plutonium into less harmful material and dispose of it, said George Perkovich, vice president for studies at the Carnegie Endowment for International Peace.

Putin's move, Perkovich said, "is not a shock," and reflects more of an opportunity for Moscow "to register political dissatisfaction" than a serious threat to nuclear nonproliferation. Worries about the security of Russia's nuclear materials, which approached crisis proportions in the years after the breakup of the Soviet Union, have abated, Perkovich said.

In his decree, Putin said that none of the plutonium was being "used for the purpose of making nuclear weapons or other nuclear explosive devices, for any research, development, design or testing related to such devices, or for any other military purposes."

State Department spokeswoman Elizabeth Trudeau gives a statement on the U. S. suspending plans for coordinating counterterrorism strikes in Syria with Russia and negotiations over a cease-fire. (U.S. State Department)