US Sets Criteria For Visa Applicants From 6 Muslim Countries

The new guidelines, issued after the Supreme Court partially restored US President Donald Trump's executive order, say that applicants must prove a relationship with a parent, spouse, child, adult son or daughter, son-in-law, daughter-in-law or sibling in the United States. 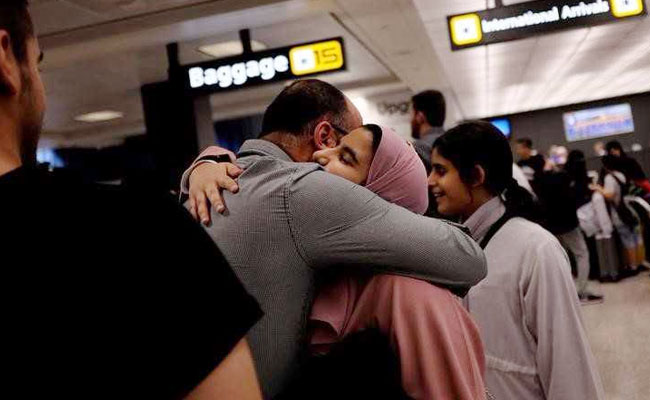 Washington: Visa applicants from six Muslim-majority countries must have a close US family relationship or formal ties to a US entity to be admitted to the United States under guidance distributed by the US State Department on Wednesday.

The guidance defined a close familial relationship as being a parent, spouse, child, adult son or daughter, son-in-law, daughter-in-law or sibling, including step siblings and other step family relations, according to a copy of a cable distributed to all U.S. diplomatic posts and seen by Reuters.

The cable, first reported by the Associated Press, said close family "does not include grandparents, grandchildren, aunts, uncles, nieces, nephews, cousins, brothers-laws and sisters-in-law, fiances and any other 'extended' family members."

It also specified that any relationship with a U.S. entity "must be formal, documented, and formed in the ordinary course, rather than for the purpose of evading the E.O.," a reference to US President Donald Trump's March 6 executive order barring most U.S. travel by citizens of the six nations for 90 days.

The cable provides advice to US consular officers on how to interpret Monday's Supreme Court ruling that allowed parts of the executive order, which had been blocked by the courts, to be implemented while the highest US court considers the matter.

The six nations whose citizens are covered by the executive order are Iran, Libya, Somalia, Sudan, Syria, and Yemen.

Asked about the guidance issued on Wednesday night, the State Department declined to comment on internal communications.

The cable's language closely mirrored the Supreme Court's order on the travel ban, though it appeared to interpret it in a narrow manner, notably in its definition of close family.

It was unclear on Wednesday evening whether the State Department's interpretation of the court's order would spark further legal action by opponents of the ban.

Similarly, those eligible for family or employment based immigrant visa applications are exempt from the travel ban, the cable said.

The cable said "a worker who accepted an offer of employment from a company in the United States or a lecturer invited to address an audience in the United States would be exempt" from the travel ban, but someone who simply made a hotel reservation would not count as someone with a bona fide relationship.

Mr Trump's executive order also imposed a 120-day ban on entry to the United States by refugees. Monday's Supreme Court order, however, said the ban did not cover those refugees "who can credibly claim a bona fide relationship with a person or entity" in the United States.

The State Department guidance was unclear on what U.S. refugee agencies regard as a key question: whether their own dealings with refugees applying to come to the United States constituted a bona fide relationship.

The cable said that consulates should continue to interview applicants for so-called diversity visas, which are granted to individuals from countries that typically do not send many immigrants to the United States. In 2015, around 10,500 citizens from the six banned countries were selected for the diversity visa lottery, according to State Department figures.

Promoted
Listen to the latest songs, only on JioSaavn.com
The travel ban will likely bar such visas for citizens of the six countries, the cable acknowledged, stating that "we anticipate that very few DV applicants are likely to be exempt from the E.O.'s suspension of entry or to qualify for a waiver."