The Senate voted 51-49 to approve Kavanaugh in the procedural cloture vote, with one Republican, Lisa Murkowski, opposing going forward while one Democrat, Joe Manchin, voted to move ahead. 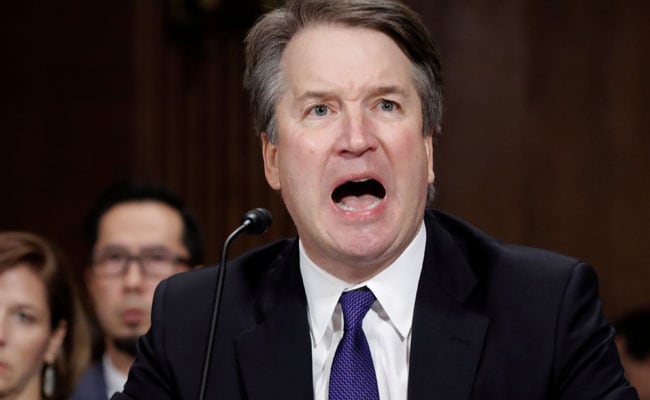 US Supreme Court Nominee Brett Kavanaugh has been accused of sexual abuse.

The US Senate on Friday narrowly approved moving to a final vote on President Donald Trump's embattled Supreme Court pick Brett Kavanaugh, but his fate remained in the balance as key Republicans appeared still undecided.

The Senate voted 51-49 to approve the conservative jurist, who has faced allegations of sexual misconduct dating back to his teenage years, in the procedural cloture vote, setting up a final showdown on Saturday.

But the outcome remains uncertain, after one Republican, Lisa Murkowski, voted against moving ahead, while a Democrat, Joe Manchin, cast his ballot in favor.

Still another Republican senator, Susan Collins, appeared to remain undecided, supporting the cloture vote but saying she would not reveal where she finally stands on Kavanaugh until Friday afternoon.

President Donald Trump cheered the result of the cloture vote, which puts him a key step closer to a major political victory for conservatives.

"Very proud of the US Senate for voting 'YES' to advance the nomination of Judge Brett Kavanaugh!" Trump tweeted.

Except for Murkowski and Manchin, the vote proceeded along party lines. To gain final approval Republicans cannot afford to lose more than one of their senators in Saturday's test.

If he wins approval, Kavanaugh -- who has faced a bruising nomination process which raised questions over his candor and lifestyle as a young man -- will seal a conservative majority on the nine-seat high court for many years to come.

Trump took the brutal battle to a new stage earlier Friday when he dismissed female anti-Kavanaugh protesters who have cited their own experiences of sexual assault as "elevator screamers." The president claimed billionaire financier George Soros, a frequent target of conservatives, was behind their demonstrations.

"The very rude elevator screamers are paid professionals only looking to make Senators look bad. Don't fall for it!" he said on Twitter.

"Also, look at all of the professionally made identical signs. Paid for by Soros and others. These are not signs made in the basement from love!"

Republicans continued to reject sexual assault and abuse allegations against Kavanaugh from three women when they were students in the 1980s, and dismiss charges from Democrats that Kavanaugh repeatedly lied in Senate testimony about his background.

The confirmation process has gripped Washington and the nation, aggravating already deep political divisions with just weeks to go before mid-term congressional elections.

The 53-year-old appeals court judge made a last-minute pitch for support in a Wall Street Journal op-ed headlined "I am an independent, impartial judge," virtually unheard-of campaigning for a nominee to the high court.

Protesters returned outside the Capitol Friday morning, a day after 302 were arrested and charged with unlawfully demonstrating inside the Senate complex.

An MSNBC report said demonstrators were also outside the home of Senate leader Mitch McConnell early Friday, pretending to drink beer -- a reference to allegations that Kavanaugh was a heavy drinker while in high school and college, when the sex abuse is alleged to have taken place.

"The resistance that has existed since the day after the 2016 election is centered right here on Capitol Hill," he said. "I hope we can say no to mob rule by voting to confirm Judge Kavanaugh."

Trump's reference to Soros, who has supported pro-democracy movements around the world and the US Democratic Party for years, appeared to aim at inciting more support and anger from the president's conservative Christian base.

The Jewish billionaire is frequently described by arch-conservatives as being a behind-the-scenes operator driving liberal and progressive movements -- criticisms that have raised counter-accusations of anti-Semitism.

But Democrats continued Friday to argue that there had been too little effort made to investigate the allegations against Kavanaugh -- especially that of Christine Blasey Ford, who says a drunken Kavanaugh tried to rape her in 1982.

On Thursday the FBI released the results of a six-day, last-minute review of the charges, which Kavanaugh's backers in the Senate said found no corroborating evidence.

(Except for the headline, this story has not been edited by NDTV staff and is published from a syndicated feed.)
Comments
kavanaugh allegationsBrett Kavanaugh case