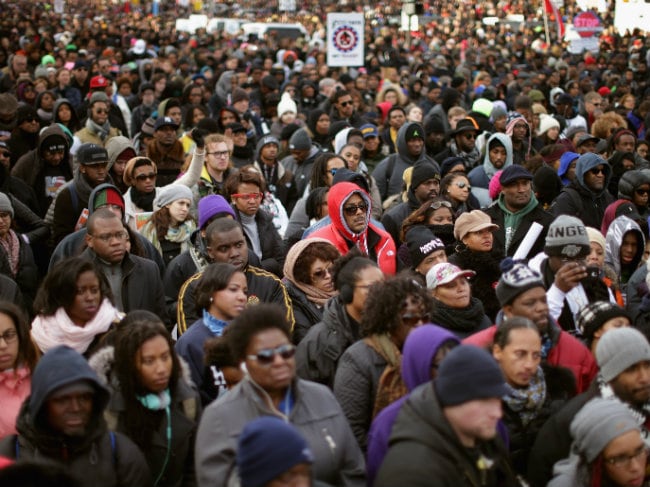 Washington: Protesters nationwide have demanded an acknowledgment that "black lives matter" after grand juries in Missouri and New York declined to indict white police officers in the deaths of two black men.

But as prospective candidates look toward replacing America's first black president in 2016, most have avoided speaking in depth or detail about the deaths of Michael Brown and Eric Garner.

Republicans do little to engage black voters for fear it will alienate other parts of the party's base, Ramakrishnan said. "Both parties are reluctant to bring up race in an explicit way unless they're forced to."

Polls show little agreement among Americans about whether the grand juries made the right decision in the Brown and Garner cases, how much race was a factor and the degree to which relations between police and people of color can improve.

Without clarity on those issues, it's unlikely any presidential candidate will choose to engage the nation in such a conversation as the 2016 election season begins, said Carol Swain, a professor of political science and law at Vanderbilt University.

"Both political parties should have an interest in this," Swain said. "But for decades, no one has known what to say or do."

The presumed leading Democratic candidate, Hillary Rodham Clinton, has said, "We have allowed our criminal justice system to get out of balance."

Republican Governor Chris Christie of New Jersey has said only that he would not second-guess a grand jury.

Promoted
Listen to the latest songs, only on JioSaavn.com
But former Arkansas Governor Mike Huckabee said Obama was wrong to meet with "thugs" and "mob members" involved in the protests in Ferguson.

"I think that those type of statements are despicable," said the Urban League's president, Marc Morial. "It demonstrates a lack of sensitivity to humanity."