Report On His Remarks About Fallen Soldiers Is "Fake Story", Says Trump

"It was a fake story written by a magazine that was probably not going to be around much longer. But it was a totally fake story, and that was confirmed by many people who were actually there," Donald Trump told reporters on Friday. 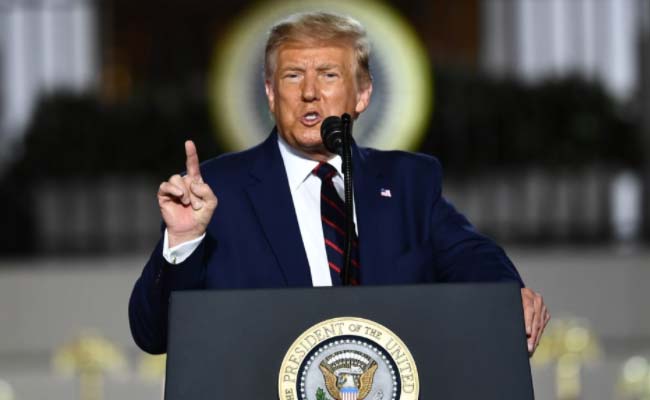 Donald Trump: Top officials from his administration came out in open in support of Trump. (File)

US President Donald Trump has said that the report on his purported remarks about fallen soldiers is a "fake story" while his White House press secretary said that liberal activists are only interested in peddling conspiracy laden propaganda.

"It was a fake story written by a magazine that was probably not going to be around much longer. But it was a totally fake story, and that was confirmed by many people who were actually there," Trump told reporters on Friday at the Oval Office of the White House when asked about a news report in The Atlantic magazine.

The report which has created a political storm alleges that Trump said "Americans who died in the war are "losers" and "suckers"."

Reporting about Trump's cancelled visit to the Aisne-Marne American Cemetery near Paris in 2018, the magazine said the president rejected the idea of the visit because he feared his hair would become disheveled in the rain, and because he did not believe it was important to honour the American war dead.

Atlantic based its story on four unnamed people with firsthand knowledge of the discussion that day.

In a conversation with senior staff members on the morning of the scheduled visit, Trump said, "Why should I go to that cemetery? It's filled with losers," the magazine alleged.

In a separate conversation on the same trip, Trump referred to the more than 1,800 marines who lost their lives at Belleau Wood as "suckers" for getting killed, the Atlantic said.

Following the publication of the news report a day earlier, his political opponents lapped at him seeking an apology.

However, Trump said there was no need as he strongly denied having ever said that.

"Do you need to apologise to service members and veterans?" he was asked.

"So, it's a fake story, and it's a disgrace that they're allowed to do it. And very interestingly... I hate to bring up his book but John Bolton, no friend of mine, I thought he was... didn't know too much about what he was doing," Trump said.

"He didn't do a good job, but he wrote a book. And if you read it, he talks about this incident and he doesn't mention it. And, frankly, a lot of reporters, even some pretty bad ones, they read that, and that was the end of the story," Trump said.

"...the military and especially people that have given their lives in the military... to me, they're heroes," he asserted.

Top officials from his administration, the White House and others familiar with the event came out in open in support of Trump.

"The story in the Atlantic has been categorically debunked by eyewitnesses and contemporaneous documents," White House Press Secretary Kayleigh McEnany told reporters at a news conference.

The Atlantic claims "when President Trump cancelled the visit to the Aisne-Marne American Cemetery near Paris in 2018, he blamed rain for the last minute decision according to the Atlantic, saying the helicopter couldn't fly, and that Secret Service wouldn't drive him there. Neither claim was true, says the Atlantic. That has been debunked," McEnany said.

"So, why would a publication abandon all journalistic integrity and publish this story? It's because the liberal activists at the Atlantic are uninterested in the truth and they are only interested in peddling conspiracy laden propaganda," she said.

"Because here is the one truth, no one, and I mean no one loves and cares for our service men and women as much as President Donald J Trump," she added.

Democratic presidential candidate and former vice president Joe Biden in a statement said that if the revelations in the article are true, then they are yet another marker of how deeply Trump and he disagree about the role of the president of the United States.

"I have long said that as a nation, we have many obligations, but we only have one truly sacred obligation - to prepare and equip those we send into harm's way, and to care for them and their families, both while they are deployed and after they return home," he said.

House Majority Leader Steny Hoyer in a statement said that Trump's words about those who died defending the nation were disgusting and outrageous.

"Never before have I seen a president or any public elected official, for that matter so callously demean the sacrifices and service of America''s fallen heroes and those currently serving," he said.

"I was actually there and one of the people part of the discussion... this never happened," she said.

She said that she sat in the room when Trump called family members after their sons were killed in action and it was heart-wrenching.

"These were some of the moments I witnessed the President show his heart and demonstrate how much he respects the selfless and courageous men and women of our military. I am disgusted by this false attack," she tweeted.

Dan Scavino, White House Deputy Chief of Staff for Communications said that he was with the president in France and has been at his side throughout it all.

"Complete lies by "anonymous sources'' that were "dropped'' just as he begins to campaign (and surge). A disgraceful attempt to smear POTUS, 60 days before the Presidential Election! Disgusting!," he said.