"Been Through Hell": Trump After Acquittal In Impeachment Trial

In a tired, raspy voice, Donald Trump said he was in no mood for forgiveness, saying he'd been "put through a terrible ordeal by some very dishonest and corrupt people." 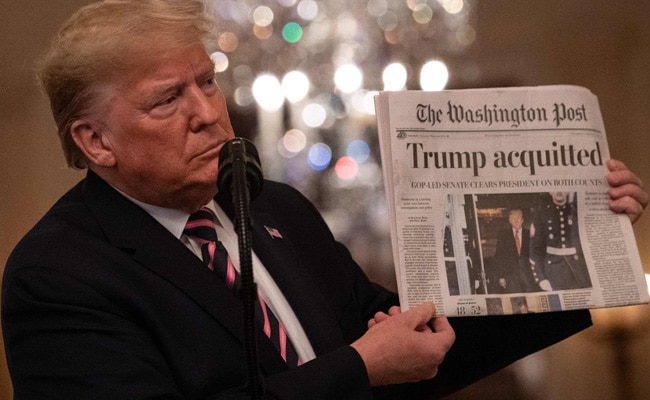 Donald Trump said he suffered a "terrible ordeal" during his impeachment.

President Donald Trump celebrated his impeachment acquittal Thursday in a rambling, emotional speech raging against the investigations that have overshadowed his entire administration.

"This is what the end result is," he said to a standing ovation.

Trump is on a victory lap after Wednesday's Senate vote clearing him of abusing his office and obstructing Congress.

But the event in the White House was an unusual mixture of Trump bitterly recounting Democratic-led investigations of his alleged corruption, joking and praise for those who stood by him.

It was "not a news conference, not a speech, it's not anything," Trump said. "It's a celebration."

Trump said he'd been "through hell" but we ended up "winning" against "vicious" Democrats.

Trump now hopes to seize the momentum to push his reelection campaign against a divided Democratic party.

He began earlier Thursday with an appearance at the annual National Prayer Breakfast, a multi-faith gathering for Washington power brokers, business leaders and conservative evangelicals.

The theme of the breakfast was "love your enemy."

But from the moment he entered to the strains of "Hail to the Chief," Trump made his feelings clear by holding up a copy of USA Today with another banner headline proclaiming his acquittal.

In a tired, raspy voice, Trump indicated he was in no mood for forgiveness, saying he'd been "put through a terrible ordeal by some very dishonest and corrupt people."

He also ripped into Democratic leader Nancy Pelosi, who as speaker of the House led his impeachment, and Mitt Romney, the lone Republican senator to support the charges.

"I don't like people who use their faith as justification for doing what they know is wrong," he said in a clear reference to Romney, a devout Mormon who cited his faith as a reason for breaking ranks with Trump.

"Nor do I like people who say 'I pray for you' when they know that's not so," he added in a jab at Pelosi, who has often spoken of praying for Trump, and who was seated an arm's length away.

Right before Trump spoke, Harvard professor Arthur Patterson called on the audience to address the "contempt and polarization that is tearing our societies apart."

Trump was impeached in the Democratic-led House last December over his attempts to push Ukraine into opening what would have been a politically damaging corruption probe into election rival Joe Biden.

But the Senate, where Trump's Republicans hold a majority, cleared him Wednesday in a party line vote illustrating the divisions running through the country ahead of the November polls.

Even though several conceded Trump's behavior was wrong, Republicans ultimately stayed loyal, voting to clear the president of charges of abuse of power, by 52 to 48, and of obstruction of Congress, by 53 to 47 -- far from the two-thirds supermajority required for conviction.

Romney, a longtime Trump foe, risked White House wrath to vote alongside Democrats on the first count, saying Trump was "guilty of an appalling abuse of public trust." He voted not guilty on the second charge.

Trump's impeachment and trial will leave a permanent stain on his record, as it did for the only two presidents to have encountered the same fate, Andrew Johnson in 1868 and Bill Clinton in 1998.

While the White House immediately declared that Trump had obtained "full vindication and exoneration," Pelosi warned that by clearing Trump Republicans had "normalized lawlessness."

"There can be no acquittal without a trial, and there is no trial without witnesses, documents and evidence," said the top Democrat in Congress -- who a day earlier ripped up her copy of Trump's State of the Union address on live television.

"Sadly, because of the Republican Senate's betrayal of the Constitution, the president remains an ongoing threat."

But as he wound down the Senate proceedings, Republican majority leader Mitch McConnell said he was confident impeachment would ultimately damage the Democrats.

"They thought this was a great idea. At least for the short term, it has been a colossal political mistake."

(Except for the headline, this story has not been edited by NDTV staff and is published from a syndicated feed.)
Comments
Donald TrumpImpeachment