US Northeast digs out from blizzard, storm brewing in plains 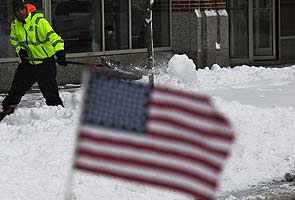 Boston/ New York: The US Northeast started digging itself out of a blizzard that dumped up to 40 inches of snow with hurricane force winds, killing at least nine people and leaving about half a million customers without power.

Airports slowly cranked back to life on Sunday, rare travel bans in Connecticut and Massachusetts were lifted, but roads throughout the region remained treacherous, according to state transportation departments. (See pics)

As the region recovered, another large winter storm building across the Northern Plains was expected to leave a foot of snow and bring high winds from Colorado to central Minnesota into Monday, the National Weather Service said.

South Dakota was expected to be hardest hit, with winds reaching 50 miles per hour, creating white-out conditions. The storm was expected to reach parts of Nebraska, North Dakota, Wyoming and Wisconsin.

Friday and Saturday's mammoth storm stretched from the Great Lakes to the Atlantic and covered several spots in the Northeast with more than 3 feet (90 cm) of snow. Connecticut, Rhode Island and Massachusetts took the brunt of the blizzard.

Hamden, Connecticut, had 40 inches and nearby Milford 38 inches, the National Weather Service said.

Amtrak said it planned to run a limited service between New York and Boston on Sunday and a regular Sunday schedule from New York to the state capital in Albany.

Stratford, Connecticut, Mayor John Harkins told WTNH television on Saturday snow had fallen at a rate of 6 inches an hour and even plows were getting stuck.

The storm dropped 31.9 inches (81 cm) of snow on Portland, Maine, breaking a 1979 record, the weather service said. Winds gusted to 83 miles per hour (134 km per hour) at Cuttyhunk, New York, and brought down trees across the region.

The storm contributed to at least five deaths in Connecticut and two each in New York state and Boston, authorities said. A motorist in New Hampshire also died when he went off a road, but authorities said his health may have been a factor in the crash.

The two deaths in Boston were separate incidents of carbon monoxide poisoning in cars, an 11-year-old boy and a man in his early 20s. The boy had climbed into the family car to keep warm while his father cleared snow. The engine was running but the exhaust was blocked, said authorities.

There were also road rescues along the Long Island Expressway from Friday night to Saturday morning, some using snowmobiles. A baby girl was delivered early Saturday by emergency services personnel in Worcester, Massachusetts.

Promoted
Listen to the latest songs, only on JioSaavn.com
Bradley International Airport in Windsor Locks, Connecticut, and Long Island MacArthur Airport were both expected to reopen on Sunday morning. Both were closed on Saturday.

By early Sunday, utility companies were reporting roughly 500,000 customers still without electricity across the nine state region after the wet heavy snow brought down tree branches and power lines. About 277,000 were in Massachusetts.
© Thomson Reuters 2013