While Donald Trump offered warm words for Ruth Bader Ginsburg, he has made no secret of his interest in further shaping the court's ideological leanings. 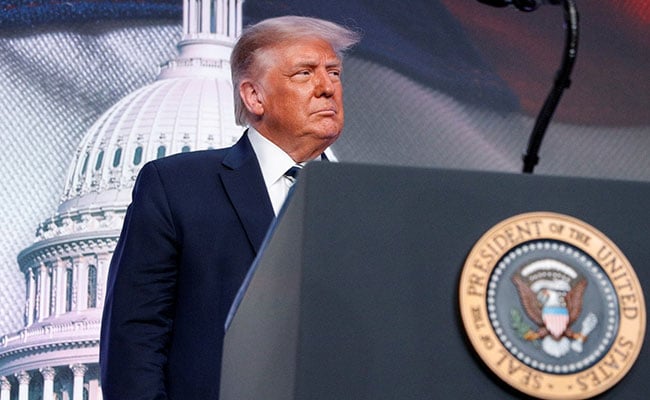 President Donald Trump on Friday hailed the late US Supreme Court justice Ruth Bader Ginsburg as a "titan of the law" whose legal expertise and historic decisions inspired generations of Americans.

"Today, our nation mourns the loss of a titan of the law" who was "renowned for her brilliant mind and her powerful dissents at the Supreme Court," Trump said in a statement.

"Her opinions, including well-known decisions regarding the legal equality of women and the disabled, have inspired all Americans, and generations of great legal minds," he added.

"May her memory be a great and magnificent blessing to the world."

Earlier in the evening, in learning of the liberal icon's death while he was on the campaign trail, Trump paid tribute to the "amazing life" of the 87-year-old justice.

Trump was on stage at a rally in Minnesota when news broke of the death of the justice known in popular culture as "the Notorious RGB," and was informed of her passing by reporters after his speech.

"She just died?" he told reporters. "I didn't know that."

"Whether you agreed or not, she was an amazing woman who led an amazing life," he added. "I'm actually saddened to hear that."

US flags at the White House were lowered to half staff Friday "in honor of Supreme Court Justice Ruth Bader Ginsburg, a trailblazer for women," press secretary Kayleigh McEnany said on Twitter.

Flags were also lowered at the US Capitol at the direction of House Speaker Nancy Pelosi, the top Democrat and Trump's chief nemesis in Washington.

"Justice Ginsburg embodied justice, brilliance and goodness, and her passing is an incalculable loss for our democracy and for all who sacrifice and strive to build a better future for our children," Pelosi said in a statement.

While Trump offered warm words for Ginsburg, he has made no secret of his interest in further shaping the court's ideological leanings.

As he battles for reelection, Trump has told supporters he will pack the court with conservative-leaning justices for a generation to come if he defeats his Democratic rival Joe Biden in November.

In August Trump told conservative radio talk show host Hugh Hewitt that he "absolutely" would fill a high court vacancy should an opportunity present itself  before his first term expired.