The memorial to the Sikhs killed in the 1984 anti-Sikh riots was installed at the Otis Library in Norwich about three months ago and was placed on a wall of the library's main lobby, according to a report in The Bulletin. 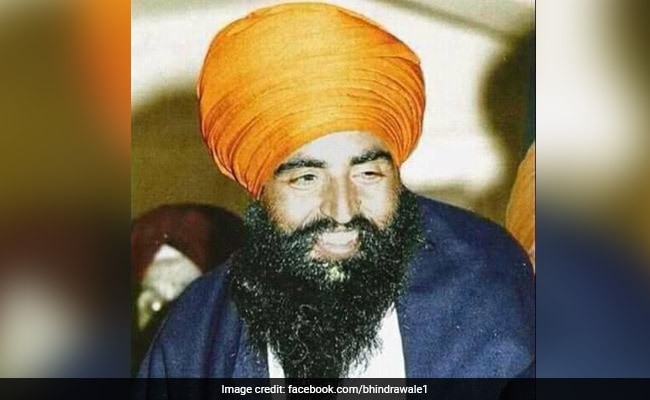 A library in the US state of Connecticut has removed a memorial that featured a portrait of killed terrorist Jarnail Singh Bhindranwale, with the top Indian diplomat in New York welcoming the "wise decision" taken by it not to allow a divisive agenda to create rift within the Sikh community.  Jarnail Singh Bhindranwale, head of Sikh religious sect Damdami Taksal, was killed along with his armed followers during ''Operation Blue Star'' launched by Army at Golden Temple Complex in June 1984.

The memorial to the Sikhs killed in the 1984 anti-Sikh riots was installed at the Otis Library in Norwich about three months ago and was placed on a wall of the library's main lobby, according to a report in The Bulletin.

In 1984, Jarnail Singh Bhindranwale and his followers had occupied Harmandir Sahib and fortified Sikh shrine Akal Takht, from where they were allegedly running terror activities in Punjab.

"I am happy that the unity of the community has been maintained and the library took a wise decision in not allowing a divisive agenda to create rift within the community," India''s Consul General in New York Sandeep Chakravorty told PTI in New York.

The Bulletin quoted president of the library Board of Trustees Nicholas Fortson as saying that Otis Library and the Norwich Monuments Committee jointly agreed to remove the plaque, flags and portrait. It was removed about two weeks ago, he said.

A local business owner Swaranjit Singh Khalsa had donated the memorial and had lobbied to have it put up.

The report added that the city's Plaques and Monuments Committee, whose members are Alderwoman Stacy Gould, Alderman Joe DeLucia and Council President Pro Tem Bill Nash, had agreed to the library''s request to remove the memorial, Mr Gould said.

"They just decided this was not good for the mission of the library," Mr Gould said adding that the "library doesn''t want to get involved in some controversy."

"The library is a nonpolitical organisation," Fortson said in the report adding that it neither endorses products nor partisan political causes. "We want to make sure our visitors are in a safe atmosphere."