"No Choice But To Act": US House Speaker On Move To Impeach Donald Trump

Trump on Thursday dared Democrats to act quickly, turning his focus to the Senate where the White House has already previewed an aggressive defense strategy that could entail calling witnesses to the chamber floor. 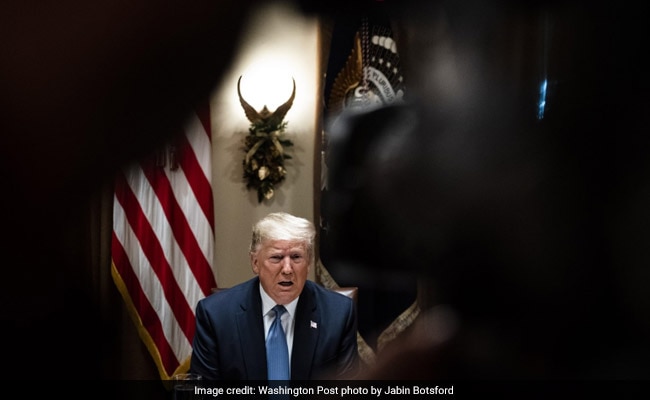 House Speaker Nancy Pelosi announced Thursday that Democrats will begin drafting articles of impeachment against President Donald Trump, setting up a constitutional clash that Trump now says he embraces and is eager to frame on his terms when it moves to an expected Senate trial next month.

In a solo appearance at the Capitol, Pelosi argued that the president's conduct when it came to Ukraine left Democrats with "no choice but to act," charging that Trump abused the powers of the presidency and leaving little doubt that the House will hold a vote to impeach him as early as before Christmas.

"His actions are in defiance of the vision of our founders and the oath of office that he takes to preserve, protect and defend the Constitution of the United States," Pelosi said. Announcing that key chairmen will proceed with writing the impeachment charges, the speaker praised her ranks' "somber approach to actions, which I wish the president had not made necessary."

Pelosi did not detail a specific timeline or how expansive the articles of impeachment would be. House Democrats have considered charges that include obstruction and bribery, according to congressional aides, as they continue to debate internally over widening the articles to cover Trump's conduct outlined in former special counsel Robert Mueller's Russia investigation as evidence that the president has repeatedly obstructed justice and solicited or welcomed foreign interference in his election bids.

The aides cautioned that the situation remains fluid. But Democratic leaders believe they have overwhelming support for articles dealing with the core of Trump's conduct regarding Ukraine, according to two leadership aides who spoke on the condition of anonymity to discuss the private deliberations. Lawyers from the House Intelligence Committee, which drafted a 300-page report detailing Trump's alleged misconduct, will present the official findings in another highly-anticipated hearing before the House Judiciary Committee on Monday.

Leading Democrats, including Pelosi and House Intelligence Committee Chairman Adam Schiff, D-Calif., have already identified as bribery and an abuse of office that rises to the "high crimes and misdemeanors" standard Trump's effort to pressure Ukrainian President Volodymyr Zelensky to launch political investigations advantageous to Trump.

Democrats allege Trump withheld a White House meeting and military aid, sought by Ukraine in the face of Russian military aggression, to force Zelensky to order official inquiries into former vice president Joe Biden and his son Hunter Biden, as well as an unfounded theory that Kyiv conspired with Democrats to interfere in the 2016 presidential election.

There is no appetite for trying to impeach Trump on grounds of treason, the third specific act listed in the Constitution's definition of impeachable offenses, according to people familiar with the plans.

While Pelosi's announcement was expected for weeks, it still marked a moment in American history. Two of the previous 44 presidents have been impeached by the House: Andrew Johnson in 1868 and Bill Clinton in 1998. Neither was convicted by the Senate and removed from office. Trump is likely to meet a similar fate, but the Senate trial would nonetheless occur less than a year before Election Day and will add another level of partisan animosity to a campaign that already promises to be full of rancor.

Trump on Thursday dared Democrats to act quickly, turning his focus to the Senate where the White House has already previewed an aggressive defense strategy that could entail calling witnesses to the chamber floor.

"They have no Impeachment case and are demeaning our Country. But nothing matters to them, they have gone crazy," he tweeted. "Therefore I say, if you are going to impeach me, do it now, fast, so we can have a fair trial in the Senate, and so that our Country can get back to business."

Trump demanded to call as witnesses an array of Republican targets, including Pelosi, Schiff and the Bidens. Republicans have also floated summoning the whistleblower, whose complaint about Trump's dealings with Ukraine triggered the impeachment inquiry.

Later at the White House, Trump dismissed any notion that he is concerned about impeachment tarnishing his legacy.

"Working Americans and their families are not well-served by Democrats' political performance art. What they really need, what they really need, are results," Senate Majority Leader Mitch McConnell, R-Ky., said in response to Pelosi's announcement. "The only path to results is bipartisan legislation."

Pelosi, who confirmed that the House will vote next week on a bill to lower prescription drug prices shortly after her impeachment announcement, downplayed any potential political retribution for Democrats at the polls.

"This has absolutely nothing to do with politics," she said.

House Majority Whip James Clyburn, D-S.C., also suggested Thursday that Democrats would be free to vote as they choose on articles of impeachment without pressure from party leadership, saying in a statement that "this is not an issue that we are going to whip."

But tensions over the impeachment inquiry and the contentious clash between the parties burst further into public view on Thursday when a reporter pressed Pelosi on whether she hates Trump - an accusation leveled by Republicans against the speaker and other Democrats.

"This is about the Constitution of the United States and the facts that lead to the president's violation of his oath of office. And as a Catholic, I resent your using the word 'hate' in a sentence that addresses me. I don't hate anyone," an agitated Pelosi responded to the reporter, James Rosen of the Sinclair Broadcast Group. "And I still pray for the president. I pray for the president all the time. So don't mess with me when it comes to words like that."

"She hates that we will soon have 182 great new judges and sooo much more," the president tweeted. "Stock Market and employment records. She says she 'prays for the President.' I don't believe her, not even close. Help the homeless in your district Nancy. USMCA?"

The tensions also spilled onto the Democratic presidential campaign trail, when Joe Biden - campaigning in New Hampton, Iowa - engaged in an extraordinary exchange with an Iowa voter who pressed him on his son's activities in Ukraine.

The younger Biden sat on the board of the Ukrainian energy company Burisma, whose owner had come under scrutiny by Ukrainian prosecutors for possible abuse of power and unlawful enrichment. As vice president at the time, Joe Biden had pressured Ukraine to fire the top prosecutor, Viktor Shokin, who Biden and other Western officials said was not sufficiently pursuing corruption cases.

There is no evidence of wrongdoing on the part of either Biden. But the Iowa farmer who challenged the former vice president accused him of "selling access" through Hunter Biden's seat on Burisma's board, even though there is no evidence Joe Biden played any role in getting him the job.

"We all know Trump has been messing around in the Ukraine over there, holding their foreign aid . . . saying they're going to investigate you," said the man, who declined to identify himself. "But you on the other hand sent your son over there to get a job and work for a gas company that he had no experience with gas or nothing, to get access to the president. You're selling access to the president just like he was."

"You're a damn liar, man. That's not true. And no one has ever said that," he responded.

Hunter Biden's position on the Burisma board has become a major point of scrutiny for Republicans who have been seeking to turn the tables against Democrats on impeachment, particularly once the fight shifts to the Senate. To that end, Trump's personal lawyer Rudy Giuliani met Thursday in Ukraine with one of the key figures working to build a corruption case against Hunter Biden.

The lawmaker, Andriy Derkach, posted on Facebook photographs of himself meeting Giuliani in the Ukrainian capital, Kyiv, vowing to set up an anti-corruption group in the Ukraine parliament. Giuliani's presence in Ukraine advances efforts by Trump allies to create an alternative narrative in the rapidly moving impeachment investigation.

But top Republicans have declined to answer why the GOP did not investigate the Bidens over the issue when they held majorities in both chambers of Congress in 2017 and 2018 if they are so concerned about it now.

House Minority Leader Kevin McCarthy, R-Calif., repeatedly dismissed the fact that information about the Bidens' actions regarding Ukraine were public knowledge well before 2019, including in several news accounts.

"Did you know any of the information?" he said in response to a question from a reporter after his weekly news conference.

(Except for the headline, this story has not been edited by NDTV staff and is published from a syndicated feed.)
Comments
Nancy PelosiDonald TrumpDonald Trump impeachment