This is not a new technology that is being implemented in US cities. Such cool pavements have been used in the past too. 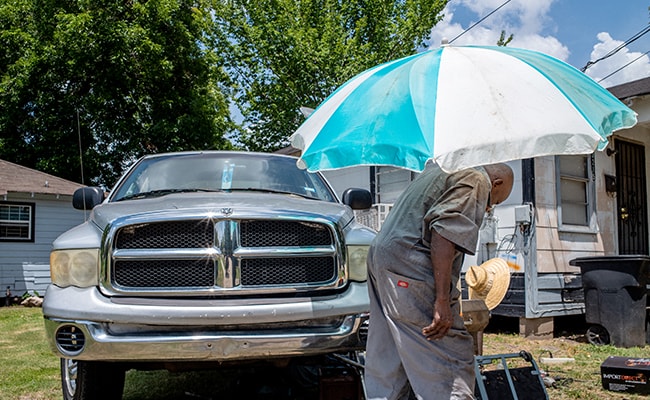 The heatwave in US has led to very high temperatures in large parts of the country. (AFP Photo)

As summer temperature soars across the United States, authorities are introducing innovative ways to keep their citizens cool. A report in Independent said that authorities in Los Angeles, California and Arizona are covering parts of roads in coating designed to cool down the asphalt. The report said that the coating absorbs and then radiates a ton of heat. The Environment Protection Agency (EPA) said that these technologies are being used across the country to to reduce the heat island effect.

This coating helps the roads reflect more sunlight than standard asphalt, making them noticeably less hot as a result. The report in Independent said the coating can keep the temperature down by 12 degrees Fahrenheit during the afternoon than the standard temperature.

Since the road emits less heat, the surroundings too are cooler. The technology will also keep the night-time temperature down as the asphalt will accumulate less heat, releasing considerably less overnight.

Environmentalists have warned that climate change is causing hotter nights, with night-time temperature going up drastically.

This coating has been applied in some areas of Los Angeles, and other states like South Carolina are also trying it out.

The EPA has listed some of the other benefits of such coating, such as reduced stormwater runoff, enhanced safety and better night time visibility. Since the coating is usually light in colour, it can enhance visibility and reduce lighting requirement thereby saving money and energy.

This is not a new technology that is being implemented in US cities. Such cool pavements have been used in the past too, and a 2019 article in Bloomberg said that they can actually make people feel hotter during the day. The article was based on a study conducted in Los Angeles in which climate scientists recorded the pavement's temperature to be seven degree Fahrenheit more than the day temperature.