J. Mark McWatters, head of the National Credit Union Administration, and his chief of staff, Sarah Vega, and their guests also showed a fondness for wine and top-shelf liquor, including, in one instance, a $45 glass of 18-year-old single-malt whiskey. 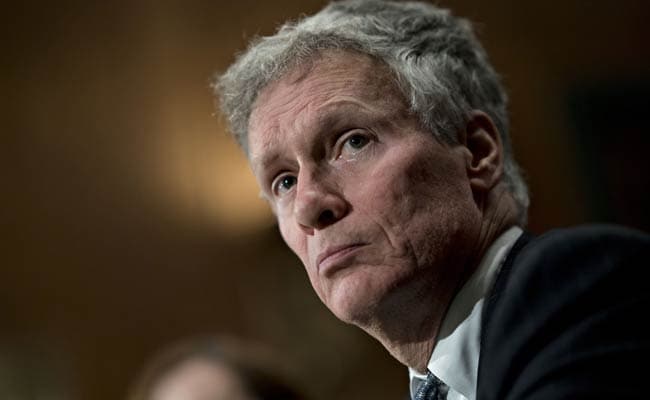 J. Mark McWatters was named chairman of the board in 2017 by President Donald Trump

They are federal financial regulators who filed for expenses like corporate CEOs, seeking reimbursement for limos, deluxe air travel and meals in posh restaurants.

There was an UberBlack ride from Washington, D.C., to neighboring Alexandria, Virginia, for $250, according to internal records obtained by The Washington Post. Two airline tickets to a meeting in Vienna came in at more than $11,000 each, even as a staffer found a way to the same event for a fraction of the price. A meal for three at Joe's Seafood near the White House cost $450 - including $45 for a dish of Dover sole and $43 for halibut, according to receipts for the meal.

J. Mark McWatters, head of the National Credit Union Administration, and his chief of staff, Sarah Vega, and their guests also showed a fondness for wine and top-shelf liquor, including, in one instance, a $45 glass of 18-year-old single-malt whiskey, records show. In 2016 and 2017, they expensed more than $2,500 worth of alcoholic beverages - most of it under Vega's account - despite a written policy prohibiting reimbursement for the purchase of alcohol.

"They have expensive taste," John Kutchey, deputy executive director of the NCUA, explained to agency investigators who asked about the spending last year.

The expense reports might have never come to light had an anonymous whistleblower not complained to the agency's inspector general about "extravagant" spending, triggering a months-long investigation in 2017 and last year, according to investigative reports and other records obtained through Freedom of Information Act requests.

The investigation, which has not been previously reported, offers an unusually detailed look at a federal regulator's expense account and serves as a reminder that perquisites far beyond the reach of most Americans are an accepted part of governance in some quarters of the nation's capital.

The NCUA is an independent agency that oversees and insures the deposits of credit unions, which operate as nonprofit financial institutions owned by members. There are more than 5,500 federally insured credit unions, with 111 million members.

NCUA operations are funded by fees from credit unions, and the agency's board is made up of members appointed from both political parties. Because the agency does not receive appropriations from Congress, it has many of its own rules for operations. It has remained open during the government shutdown.

Lavish as it appears on paper, most of the spending by McWatters and Vega appears to be permitted under its rules, according to agency officials and the inspector general's probe. That includes more than $60,000 in additional funding that was moved from one account to another in 2017 to cover McWatters' travel, lodging and per-diem expenses, the records show.

The NCUA issued statements to The Post strongly defending the pair, saying McWatters and Vega did nothing wrong.

"The claims for reimbursement were within the parameters of agency policy," the agency said. "There being no violation of the law, rule or regulation, no disciplinary action was warranted."

McWatters, Vega, Kutchey and other NCUA officials did not respond to interview requests. A White House spokeswoman declined to comment.

But the IG investigators raised serious questions about the reimbursements for alcoholic beverages.

"Kutchey said that he has told McWatters and Vega and prior Board chairs and their staff at different times that the NCUA cannot pay for alcohol, and that they should make sure not to claim for alcohol," the report said.

Last March, the inspector general passed on the findings about McWatters to the White House for review and referred both cases to the Justice Department's U.S. attorney for the Eastern District of Virginia, alleging "unauthorized receipt of expenses," according to the investigative reports.

The Justice Department declined to prosecute but did not elaborate on the reasons, according to the IG reports. Officials in the Eastern District did not return messages left by The Post.

In an interview with investigators, McWatters defended himself, saying he has meals with industry officials and lobbyists "that are 2 to 3 hours long, so they can have meaningful discussions about business. McWatters said that the only thing he does during the meals is talk business," the investigative reports show.

McWatters told investigators he "knew that he could not be reimbursed for alcohol expenses," saying at one point that the failure to exclude those expenses "was his fault," the inspector general's report says. He also said he relied on an assistant and other agency officials "to make sure that he is abiding by the rules."

He lamented an agency decision to disallow the use of the luxury UberBlack, telling investigators that it has forced him to use the regular Uber car service. "I'm schlepping around in somebody's Civic," he said, according to the investigative reports.

For her part, Vega took the position that "if something was not expressly prohibited, then she assumed it was acceptable," investigators wrote.

Vega told investigators "that her failure to deduct alcohol was an oversight," the inspector general's office wrote.

The agency statements said that, contrary to multiple policy statements in recent years, research by an agency lawyer during the investigation turned up internal guidance from 2000 that said reimbursement for alcohol is permissible.

In addition, the agency said: "The OIG report alleges excess spending on the part of the Chairman's office, which is a subjective standard. In matters of opinion expressed within the OIG report, reasonable minds may disagree, which is the case."

The NCUA statements noted that the agency does not have some of the services enjoyed by more-prominent regulators, such as the Federal Deposit Insurance Corp.

"Most agencies have full-time, dedicated drivers and cars, with some having fleets, dedicated to transporting the executives," one statement said. "The costs for this type of structure far exceed any cost the NCUA has incurred for car services."

"Senior officials holding business meetings over meals is considered a regular course of operation for many agencies," the statement said. "In some of these agencies, it includes dedicated dining facilities and staffed cafeteria services, which the NCUA does not have."

"From a cost comparison and efficiency perspective," it said, "the NCUA would compare very favorably."

McWatters is a lawyer and accountant who advocates free-market principles. The Post wrote about him last year, highlighting some of his spending and an unusual aspect of his leadership at the NCUA: He telecommutes to the Alexandria, Virginia-based agency from his home in Dallas. An agency spokesman downplayed the significance of McWatters' remote work, saying it had had no impact on NCUA operations.

From the beginning of his tenure, McWatters spent money in the style of a corporate executive, including the use of hired limousines and the purchase of nearly $22,000 worth of furniture for a headquarters office he rarely used, according to receipts obtained by The Post.

One of the IG investigators involved in the probe of McWatters and Vega said in an interview that she was struck by the "sheer extravagance" of the their spending.

"There was a sense of entitlement," said Sharon Separ, who retired as assistant inspector general for investigations early last year.

The IG office found that McWatters had sought and received reimbursement for $156 in alcohol purchases during three meals in 2016 and 2017. McWatters said it was their practice for Vega to pick up the tab, the report said.

The IG report found that McWatters had participated in 14 other meals with Vega "for which his chief of staff was reimbursed $1,737 in alcohol expenses."

On her own, Vega also expensed other meals.

Their receipts show they frequented expensive restaurants, including Joe's Seafood, RPM Italian and Bistro Bis in the District of Columbia and RPM Steak in Chicago.

On April 6, 2017, McWatters hosted a dinner at the Chicago RPM, where steaks start at $43. He and his guest, former NCUA chairman Michael Fryzel, dined for nearly four hours, according to the receipt. The $276 tab included a $10 order of doughnuts and eight glasses of wine.

"Regarding the eight glasses of wine, McWatters stated, 'I can't imagine that Mike [Fryzel] drank it all so I would assume that part of that is mine. I don't recall,'" read interview notes obtained by The Post.

Vega expensed $379.84 - half of the $759.69 total bill - for an elaborate meal at Bistro Bis on Jan. 19, 2017. The foursome at the table had six glasses of 12-year-old scotch at $21 each, two bottles of wine at $60 each, two martinis, rabbit salad and Basque-style octopus, along with dishes of trout, salmon, scallops, beef bourguignon and opera cake, the receipt shows.

A frequent dinner companion was John McKechnie, an industry lobbyist and former NCUA official who dined with McWatters and Vega, sometimes separately, 16 times in 2016 and 2017. He told The Post that while such meals can be expensive, they help the industry and regulators communicate.

"My day-to-day business is to try to interact with policymakers as much as I can," McKechnie said. "There's a lot of business transacted at night in the District, which is not inexpensive."

The Washington Post's Andrew Ba Tran contributed to this report.

(Except for the headline, this story has not been edited by NDTV staff and is published from a syndicated feed.)
Comments
J Mark McWattersSarah VegaNational Credit Union Administration NCUA