Andrew Yang's campaign has gone from a long slog convincing skeptical voters about his pledge to provide every American adult with $1,000 a month 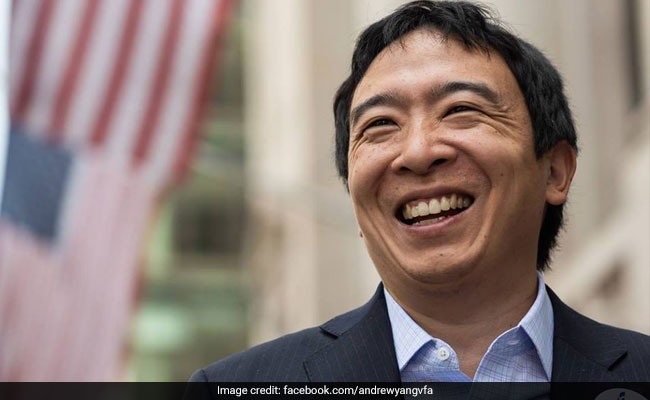 Tech entrepreneur Andrew Yang may not become the next US president, but the clear-headed futurist has mounted a surprisingly vigorous White House bid centered around his plan for universal basic income.

For the past year, the son of Taiwanese immigrants has crisscrossed early voting states like Iowa, calmly but convincingly telling whoever will listen that the automating away of some four million jobs in America's heartland helped elect President Donald Trump.

Mr Yang's message is part dark warning -- the rise of the machines is real -- and part clarion call for solutions to cushion the blow in an era of massive transformational change.

His campaign has gone from a long slog convincing skeptical voters about his pledge to provide every American adult with $1,000 a month, to a solid run for the Democratic nomination that few saw coming, and which puts him in the next nationally televised debate with nine other Democrats.

Mr Yang, 44, has seen his crowds, once numbering a few dozen people or fewer, nudge into the hundreds, sometimes 1,000-plus, and readily sits for interviews with conservative commentators, leading to broad cross-party exposure.

While he has described himself as the opposite of Trump -- "an Asian guy who likes math" -- he is eager to woo Trump supporters, especially working-class white men anxious about their diminishing socioeconomic status.

Come September 12, Mr Yang will be the only non-politician on the debate stage, standing alongside political giants like former vice president Joe Biden and Senator Bernie Sanders.

Mr Yang, whose go-to outfit is a sport coat, dress shirt and no tie, has never held elected office. He is relaxed and direct, a skilled explainer beholden to no political camp.

One year ago he was a political nobody. By February he was the novelty candidate. Today he is outpolling three sitting US senators, a current and former congressman, and the mayor of New York.

"People started catching on to the fact that I was proposing solutions, not sound bites, and that we can actually start solving the problems on the ground," Mr Yang told AFP in Iowa at a Democratic dinner.

"I'm identifying things that politicians only occasionally pay lip service to," like rising rates of suicide and depression, and declining US life expectancy.

Yang gang
The unlikely nature of Mr Yang's candidacy -- "Random Man Runs for President," read one magazine cover -- has only elevated his stature.

"Once they hear about him... they love him," said Tom Krumins, a 25-year-old in South Carolina who once worked for Venture For America, the Yang-founded non-profit training thousands of young professionals to work for US start-ups.

"As that support continues to grow and as he continues to build his visibility online and in-person presence, he's going to take it by storm."

But his signature plan provides every American 18 and over with a $1,000 monthly "freedom dividend," no strings attached, to counter automation pressures which he says could cause one third of all Americans to lose their jobs in the next 12 years.

Republicans blast the proposal as socialism. But Yang notes that a version of universal basic income has long been in place in conservative-leaning Alaska, where residents get government checks, funded by state oil revenues.

He says his dividend could be funded through consolidating certain welfare programs, implementing a value-added tax, and hiking taxes on top earners.

Not everyone is sold, including the liberal Sanders, who said he prefers a federal jobs guarantee.

"I think most people want to work," Mr Sanders told Hill TV this week. "Part of our humanity is when we are productive members of our society."

Other party rivals have ignored Yang, even as he presented sharp answers in the second debate, when he warned that "wall-to-wall robots," not undocumented workers, were stealing away US jobs.

"Immigrants are being scapegoated for issues they have nothing to do with in our economy," he said.

But he raised eyebrows when he bleakly pronounced: "We are 10 years too late" to confront climate change.