US enjoys July 4 parades, picnics under watchful eyes of police 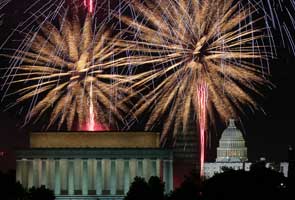 A fireworks display lit up the National Mall in Washington as a packed crowd of onlookers listened to booming cannons accompany Tchaikovsky's "1812 Overture."

President Barack Obama led Washington's celebrations, which included a concert on the National Mall, by hosting members of the US military and their families on the South Lawn of the White House.

The crowd of about 1,200 were treated to a barbecue and a concert by "The President's Own" Marine Band.

"People in scattered corners of the world live in peace today (and) are free to write their own futures because of you," Obama told the crowd, his wife Michelle at his side.

Spectators waving US flags and wearing red, white and blue headed for gatherings in Boston, New York, Washington, Atlanta and other cities under the watch of police armed with chemical detectors, radiation scanners and camera surveillance, precautions sparked by the deadly April 15 bombings.

A US national security official said on Wednesday that intelligence agencies were unaware of any attack threat by militants timed to occur on July 4.

Tourists in New York flocked to ferries headed for the Statue of Liberty, which reopened after closing in October as Superstorm Sandy approached. The storm swamped about 75 percent of Liberty Island, the statue's home off the southern tip of Manhattan.

"I'm in awe of it," Mel Burns of Brisbane, Australia, said as she gazed up for the first time at Lady Liberty's torch more than 300 feet (91 meters) above the ground. "It's a lot bigger than what I anticipated."

At a ceremony near the statue's pedestal, David Luchsinger, the superintendent of the Statue of Liberty National Monument and Ellis Island, recalled the statue's repeated closures since the attacks of September 11, 2001, including for a renovation.

"I don't know about you, but I'm getting a little sick and tired of opening and closing and re-opening the Statue of Liberty," he said, drawing laughter from the crowd, "so this time, I think we'll just keep it open."

Others headed for Brooklyn's Coney Island to cheer on competitors in the annual Nathan's Famous hot dog eating contest.

Champion Joey "Jaws" Chestnut broke his own world record by downing 69 hot dogs and buns in 10 minutes, holding onto the Mustard Yellow International Belt. His female counterpart, Sonya "The Black Widow" Thomas, also held onto her title, swallowing 36 and three-quarter dogs in 10 minutes.

"I think it's very New York and very exciting," said Samantha Belfon, 29, a clinical social worker from Brooklyn, who braved the summer heat to watch the annual competition.

Amid controversy over revelations about the National Security Agency, some marked the United States' 237th birthday by demanding respect for its founding principles.

In Birmingham, Alabama, about 50 demonstrators gathered under intermittent rain and thunderstorms for a "Restore the Fourth" protest - a reference to the US Constitution's Fourth Amendment protections against unreasonable searches and seizures - to denounce NSA surveillance programs.

The NSA scandal weighed heavily on the minds of some parade-goers in Maplewood, New Jersey.

"I think we've lost our way," said Joe Kyle, a high-school history teacher who was pulling his two young daughters in a red wagon festooned with a half-dozen American flags.

Referring to Edward Snowden, a former NSA contractor wanted by Washington for leaking secrets about government surveillance, Kyle said: "I think he should be celebrated, not prosecuted."

Fourth of July celebrations mark some of the largest public gatherings since bombs exploded at the Boston Marathon, the biggest attack on American soil since attacks on the World Trade Center and Pentagon on September 11, 2001.

Promoted
Listen to the latest songs, only on JioSaavn.com
Tamerlan and Dzhokhar Tsarnaev, the two brothers suspected of carrying out the Boston attack, originally planned to set off their homemade bombs on July 4 but struck earlier because they had made the devices sooner than expected, law enforcement officials have said.

Tamerlan was killed in a shootout with police. Dzhokhar is awaiting trial on charges including murder and using a weapon of mass destruction.
© Thomson Reuters 2013