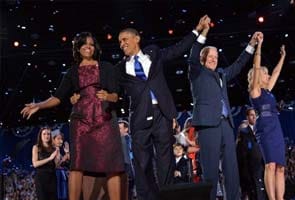 Washington: President Barack Obama won a second term in the White House on Tuesday, overcoming deep doubts among voters about his handling of the U.S. economy to score a clear victory over Republican challenger Mitt Romney.

Americans chose to stick with a divided government in Washington, by keeping the Democratic incumbent in the White House and leaving the U.S. Congress as it is, with Democrats controlling the Senate and Republicans keeping the House of Representatives.

Obama told thousands of supporters in Chicago who cheered his every word that "we have picked ourselves up, we have fought our way back" and that for America, the best is yet to come.

He vowed to listen to both sides of the political divide in the weeks ahead and said he would return to the White House more determined than ever to confront America's challenges.

"Whether I earned your vote or not, I have listened to you, I have learned from you. And you have made me a better president," Obama said.

The nationwide popular vote remained extremely close with Obama taking about 50 per cent to 49 per cent for Romney after a campaign in which the candidates and their party allies spent a combined $2 billion.

Romney, the multimillionaire former private equity executive, came back from a series of campaign stumbles to make it close after besting the president in the first of three presidential debates.

The 65-year-old former Massachusetts governor conceded in a gracious speech delivered to disappointed supporters at the Boston convention centre. He had called Obama to concede defeat after a brief controversy over whether the president had really won Ohio.

"This is a time of great challenge for our nation," Romney told the crowd. "I pray that the president will be successful in guiding our nation."

He warned against partisan bickering and urged politicians on both sides to "put the people before the politics."

Obama told his crowd that he hoped to sit down with Romney in the weeks ahead and examine ways to meet the challenges ahead.

The president Obama scored impressive victories in the crucial state of Ohio and heavily contested swing states of Virginia, Nevada, Iowa and Colorado. They carried the Democrat past the 270 electoral votes needed for victory in America's state-by-state system of choosing a president, and left Romney's senior advisers shell-shocked at the loss.

Obama, America's first black president, won by convincing voters to stick with him as he tries to reignite strong economic growth and recover from the worst recession since the Great Depression of the 1930s. An uneven recovery has been showing some signs of strength but the country's 7.9 percent jobless rate remains stubbornly high.

Obama's victory in the hotly contested swing state of Ohio - as projected by TV networks - was a major step in the fight for the 270 electoral votes needed to clinch the White House and ended Romney's hopes of pulling off a string of swing-state upsets.

Obama scored narrow wins in Ohio, Wisconsin, Iowa, Pennsylvania and New Hampshire - all states that Romney had contested - while the only swing state captured by Romney was North Carolina, according to television network projections.

Romney initially delayed his concession as some Republicans questioned whether Obama had in fact won Ohio despite the decisions by election experts at all the major TV networks to declare it for the president.

The later addition of Colorado and Virginia to Obama's tally - according to network projections - meant that even if the final result from Ohio were to be reversed, Romney still could not reach the needed number of electoral votes.

While Obama supporters in Chicago were ecstatic, Romney's Boston event was grim as the news was announced on television screens there. A steady stream of people left the ballroom at the Boston convention centre.

At least 120 million American voters had been expected to cast votes in the race between the Democratic incumbent and Romney after a campaign that was focused on how to repair the ailing U.S. economy.

The same problems that dogged Obama in his first term are still there to confront him again.

Democrat Claire McCaskill retained her U.S. Senate seat from Missouri, beating Republican congressman Todd Akin, who stirred controversy with his comment in August that women's bodies could ward off pregnancy in cases of "legitimate rape."

Democrats gained a Senate seat in Indiana that had been in Republican hands for decades after Republican candidate Richard Mourdock called pregnancy from rape something that God intended. Democratic congressman Joe Donnelly won the race.

Former Maine Governor Angus King won a three-way contest for the Senate seat of retiring Republican Olympia Snowe. King ran as an independent, but he is expected to caucus with Democrats in what would amount to a Democratic pick-up.

Democrats were also cheered by several state referendums. Maryland voters approved same-sex marriage, the governor said, and a similar measure in Maine appeared on track to pass as well - marking the first time marriage rights have been extended to same-sex couples by popular vote.