US, Cuba Hold Highest-Level Meeting in More Than 50 Years 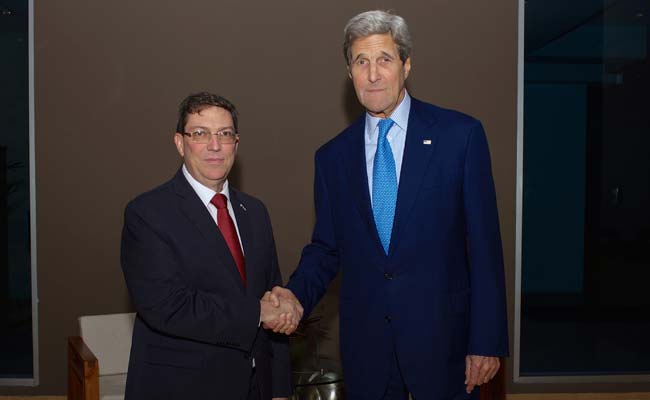 The US and Cuban foreign ministers sat down for talks late on Thursday in the highest-level meeting between the two sides since the early days of the Cuban revolution more than half a century ago.

Kerry and Rodriguez talked sitting face to face on separate white couches in a room visible through a large glass window.

The meeting appeared to last more than two hours and broke up at around 11:30 p.m. At times, Kerry gesticulated to Rodriguez with his hands as security officials stood guard outside.

The meeting took place on the eve of the Summit of the Americas in Panama, where Obama and Cuban President Raul Castro will cross paths along with other leaders in the region.

Obama appears to be close to removing Cuba from the list of countries that the US government says sponsor terrorism. Cuba's inclusion on the list has exacerbated tensions and made it harder for US firms to do business in Cuba.

The US State Department has now recommended that Cuba be taken off the list, a US Senate Foreign Relations Committee aide said on Thursday.

Obama's decision to move toward restoring full diplomatic ties marks a sea change in relations since the Cuban revolution, when US-backed dictator Fulgencio Batista fled the island on Jan. 1, 1959, as Fidel Castro and his revolutionaries seized control.

Promoted
Listen to the latest songs, only on JioSaavn.com
John Foster Dulles and Gonzalo Guell were the last US and Cuban foreign ministers to hold a formal meeting, in Washington on Sept. 22, 1958, said a US official who spoke on condition of anonymity.

The highest-level meeting after the revolution took place in April 1959, between then-Vice President Richard Nixon and Fidel Castro, who Cuba's prime minister at the time. Relations between the United States and Cuba rapidly deteriorated soon after.
© Thomson Reuters 2015