US Agencies Say 2015 Was Hottest Year On Record 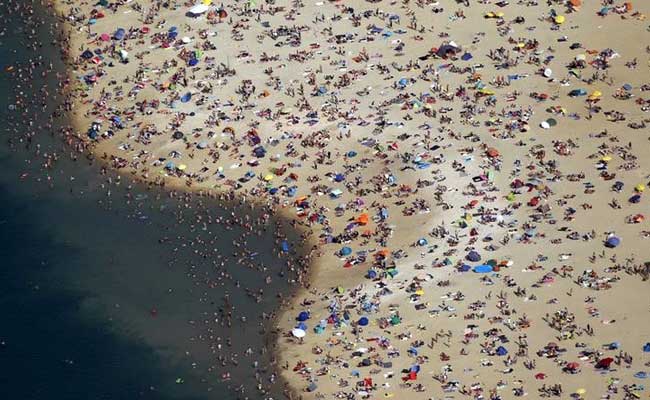 An aerial view shows people at a beach on the shores of the Silbersee lake on a hot summer day in Haltern, Germany, on July 4, 2015. (Reuters)

Washington: Last year's global average temperature was the hottest ever by the widest margin on record, two US government agencies said on Wednesday, adding to pressure for deep greenhouse gas emissions cuts scientists say are needed to arrest warming that is disrupting the global climate.

Data from the US space agency NASA and the National Oceanic and Atmospheric Administration showed that in 2015 the average temperature across global land and ocean surfaces was 1.62 degrees Fahrenheit (0.90 Celsius) above the 20th century average, surpassing 2014's previous record by 0.29 F (0.16 C).

This was the fourth time a global temperature record has been set this century, the agencies said in a summary of their annual report.
"2015 was remarkable even in the context of the larger, long-term warming trend," said Gavin Schmidt, director of NASA's Goddard Institute for Space Studies.

The sharp increase in 2015 was driven in part by El Nino, a natural weather cycle in the Pacific that warms the ocean surface every two to seven years. But scientists say human activities - notably burning fossil fuels - were the main driver behind the rise.

The latest El Nino started in late 2015 and will last until spring 2016. It is among the strongest ever recorded but Schmidt and others say the weather phenomenon played just a supporting role in the earth's temperature rise.

MORE THAN HALFWAY TO UN TARGET

The 2015 data underscores the urgency of cutting greenhouse gas emissions if the world is to hold temperature increases to well below 2 degrees C, the target agreed to by more than 190 countries at climate talks in Paris last December, scientists said.

With the global mean surface temperature in 2015 more than 1 degree C above late-19th century levels, the world is now halfway to the UN target, which would require stronger greenhouse gas emissions cuts.

"This announcement should put pressure on governments to urgently implement their commitments to act against climate change, and to increase the strength of their planned cuts in annual emissions of greenhouse gases," said Bob Ward, policy director of the Grantham Research Institute on Climate Change and the Environment in London.

In the United States, some Republican lawmaker and those skeptical of human-caused climate change have pointed to a slowdown in temperature rise after the last powerful El Nino in 1998 as a sign that climate change is not a serious problem.

Republican presidential candidate Ted Cruz said in December at a hearing on climate change science that there had been no significant global warming for the past 18 years.

NOAA's Karl said that with two back-to-back years of record warming, likely to be followed with a third next year, any doubts that have been raised by skeptical lawmakers about a pause in global warming can be put to rest.

"There is no sign of a pause and slowing," Karl told reporters Wednesday, adding that it is a safe bet that 2016 will break the 2015 record given the long-term trend and the impact of El Nino in the first quarter of the year.
© Thomson Reuters 2016