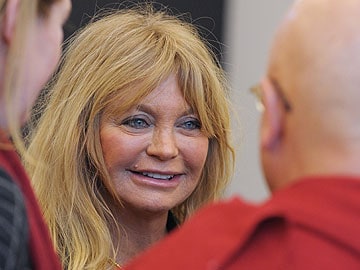 US actress Goldie Hawn (C) speaks with French Buddhist monk Matthieu Ricard during a session at the World Economic Forum in Davos on January 23, 2014

Davos, Switzerland: If the million-dollar deals, schmoozing and champagne receptions begin to get a little stressful, the billionaire movers and shakers at Davos found a way to inner peace on Thursday with a session on meditation.

But this being the World Economic Forum in Davos, where celebs and world leaders rub shoulders in cushy conference rooms, it was no ordinary meditation panel, but one led by Oscar-winning US actress Goldie Hawn.

And despite the hotly awaited speech by Iranian President Hassan Rouhani taking place at the same time, the 68-year-old star had no trouble pulling in the punters, with delegates queuing round the corner to get in and many turned away disappointed.

After French Buddhist monk Matthieu Ricard, resplendent in orange and blue robes, had led the assembled global elite in a calming moment of relaxation, Hawn spoke of her meditation for children project which she said had "caught her by the bellybutton."

Hawn said that after the September 11, 2001 terrorist attacks, "realising that the world had truly changed forever and our children were going to inherit a world that I didn't think they had the tools to handle", she decided to help children harness the power of their minds.

Her foundation has introduced meditation exercises in schools across five continents and she said the participating children were "just flourishing".

"Let's put the humanity back into the classroom," urged the actress best known for her comedy roles.

In between short pauses for meditation, the Davos participants - many sitting on the floor for lack of space - heard from medical researchers on the benefits.

Professor Richard Davidson from the University of Wisconsin presented research showing that people who had undertaken a meditation course were found to have a higher immunity to influenza and a higher tolerance of pain.

Studies had also shown that introducing meditation at a young age gives children greater self control and leads to fewer criminal convictions in adulthood, Davidson said.

Haakon, Crown Prince of Norway, was among the satisfied customers.

"I went to a session like this a few years ago and that's what I find interesting about Davos, you can do a whole lot of different things," he told AFP.

"This is not the sort of thing I get to do on a regular basis."

Hawn told the global elite that the Davos focus should be on society and how people interacted with each other.

Promoted
Listen to the latest songs, only on JioSaavn.com
"We have to create equanimity, we have to listen to each other. We have to care deeply, collectively, about our society as a whole, otherwise we will create a world not worth living in," she said to applause.