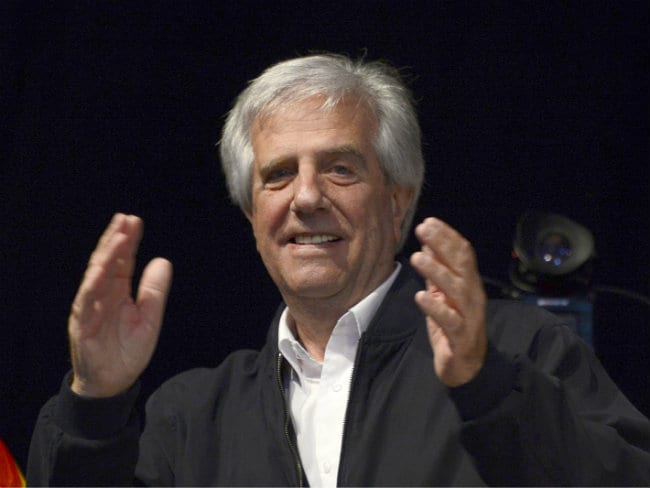 Montevideo: Tabare Vazquez, the former Uruguayan president who leapfrogged back to the helm Sunday, is a cancer doctor with a far more traditional style than his ex-rebel, marijuana-legalizing predecessor, Jose Mujica.

A 74-year-old grandfather who favors dark suits and ties, Vazquez cuts a very different figure from Mujica, a former guerrilla who lives in a ramshackle farmhouse, drives a beat-up Volkswagen, donates most of his salary to charity and is widely known as "Pepe."

Raised in a working-class family, Vazquez is a self-made achiever with an impressive resume that includes stints as a paperboy, waiter, carpenter and football club director, as well as an oncologist and president.

"I come from a very humble home and managed to study thanks to public elementary school and high school," he said in a recent TV interview.

"I'm a product of all that and I feel deeply grateful and indebted to Uruguayan society."

Vazquez rode a wave of popular discontent to win election as Uruguay's first leftist president in 2004 in the dismal aftermath of a regional economic crisis.

He rebooted the economy, introduced tax and health care reforms, created a program to give laptops to every public school student, and launched strict anti-smoking laws that put him on a collision course with tobacco giant Philip Morris, which is suing the South American country for $25 million in an ongoing case.His anti-smoking crusade is a kind of homage to his blue-collar family, which lost three members to cancer -- his mother, father and sister -- in the 1960s, when Vazquez was putting himself through medical school.

But it puts him in an awkward position over Mujica's landmark legislation legalizing marijuana and creating a regulated market for the drug.

That is one of several points of friction between the buttoned-down doctor and the iconoclastic Mujica, 79, who have clashed at times within their Broad Front (FA) coalition.

But they have dutifully campaigned for each other as each has left office with high approval ratings, handing power over to his party colleague in this country that bars presidents from serving consecutive terms.

Born January 17, 1940, Vazquez came of age in the turbulent 1960s but steered clear of politics, devoting himself to his studies as Mujica and his comrades in the Tupamaros National Liberation Movement took up arms against the government.

His political engagement only came near the end of Uruguay's 1973-1985 dictatorship, when he secretly joined the Socialist party in 1983.

Charismatic and direct, he was elected the first leftist mayor of the capital Montevideo in 1989.

He mounted two unsuccessful presidential bids in 1994 and 1999, then finally made history by becoming the first FA candidate to be elected president, ending 174 years of dominance by Uruguay's two traditional parties: the "Colorados" (Reds) and "Blancos" (Whites, now officially called the National Party).

He continued practicing medicine through his first presidential term, but has said he will give it up this time around.