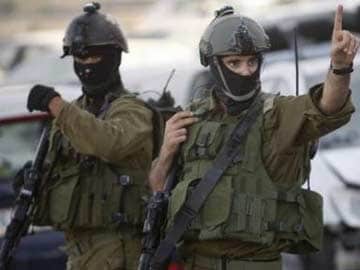 An Israeli soldier gestures as he takes part in an operation to locate three Israeli teens near the West Bank City of Hebron June 19, 2014.

United Nations: The UN voiced concern on Monday over the deaths of four Palestinians as Israeli security forces have pressed a campaign to find three teenagers who went missing in the West Bank.

Since the youths disappeared from a hitchhiking stop in the southern West Bank on June 12, Israel has rounded up hundreds of Palestinians in a bid to find them, while also crushing the West Bank network of Islamist movement Hamas, which it accuses of abducting the teens.

Troops have also killed four Palestinians in the crackdown in the past week, and on Monday the United Nations called the deaths in the security sweep "alarming".

"The rising death toll as a result of Israeli security operations in the West Bank is alarming," Jeffrey Feltman, UN under secretary for political affairs, was quoted as saying in a statement.

"As the search for the missing youth continues, we call for restraint in carrying out the security operations in strict compliance with international law, and avoiding punishing individuals for offences they have not personally committed."

"We nevertheless find Hamas statements glorifying the perpetrators of this act to be outrageous," he said, referring to initial Hamas praise of the alleged kidnapping as a form of resistance.

There has been no claim of responsibility and no sign of the missing youngsters, although military spokesman General Motti Almoz said on Sunday that all information indicated they "are alive".

With tensions rising among Palestinians over the crackdown and the deaths, the campaign is expected to shift focus to intelligence gathering rather than mass arrests.

But Israeli security forces rounded up a further 37 Palestinians in the West Bank overnight, the army said

"Overnight, the forces detained 37 suspects and searched 80 locations, specifically in the area north west of Hebron, Beit Awwa (southwest of Hebron) and also in (the northern city of) Jenin," an army spokeswoman said.

So far, troops have arrested 361 people, among them 250 Hamas members and 57 who were freed during a 2011 prisoner swap deal to secure the release of Gilad Shalit, a soldier held in Gaza for five years by Hamas, the army said.

Press reports said Operation Brother's Keeper was nearing its end in the present format and would be refocused ahead of the start next week of the Muslim holy month of Ramadan.

"The defence establishment is troubled by the increase in the number of Palestinian casualties and the possibility that the confrontations will spill over into the month of Ramadan, which starts in less than a week," wrote Haaretz defence correspondent Amos Harel.

Backlash concerns
"The IDF (army) would likely prefer to significantly reduce the size of its deployment and return to more focused intelligence gathering," he said, indicating the military was likely to encounter problems in mustering enough evidence to put many of the detainees on trial.

There was no immediate comment on the reports by the army.

Palestinian president Mahmud Abbas has denounced the abductions and defended his security forces' ongoing cooperation with their Israeli counterparts to try to locate the missing boys.

But there are growing signs of Palestinian frustration with their own security forces, with angry protesters hurling rocks a Ramallah police station on Sunday, smashing the windows of two police cars.

Later on Monday, dozens of people protested in Ramallah against the Palestinian Authority's security cooperation with Israel, with some calling for a new intifada, or uprising, against the occupation.

Former Hamas prime minister Ismail Haniya described the clashes in the West Bank as the start of another intifada.

Promoted
Listen to the latest songs, only on JioSaavn.com
"We're not saying the intifada will start; we're saying it has started already in the West Bank, and no one can stop it," Haniya told journalists in Gaza.

"The enemy (Israel) cannot put a stop to the escalation of the resistance."
Comments
UNIsrael teenagersPalestineJerusalemUnited Nations