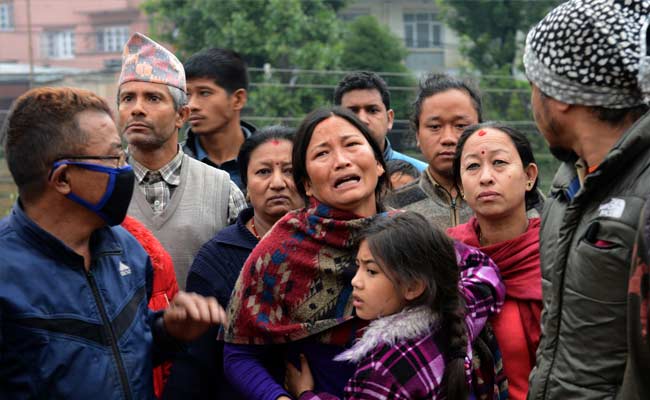 Thousands have been left to seek refuge in open spaces, either because their homes have been flattened or they are afraid to return home because of the aftershocks.

Geneva: The UN food agency said Monday it was preparing a large-scale aid operation to earthquake-ravaged Nepal, with a first plane set to arrive Tuesday.

"This will be a large, massive operation," Elisabeth Byrs, spokeswoman for the UN's World Food Programme, told AFP.

Officials say more than 3,500 people are now known to have died, including 3,432 in Nepal -- making it the quake-prone Himalayan nation's deadliest disaster in more than 80 years.

The United Nations is gearing up to launch an emergency appeal for aid for the region.

WFP experts arrived in Kathmandu on Sunday to evaluate the needs, and the agency estimates shelter and medical equipment should be the first priority.

The World Health Organization said Monday it had already distributed medical supplies to cover the health needs of more than 40,000 people for three months in the country.

But with food also expected to quickly run scarce, the UN agency has "mobilised all of our food stocks in the region," Byrs said.

WFP is loading a plane with rations of food that does not require cooking in Dubai, and Byrs said it would likely arrive in Nepal Tuesday.

The food will be distributed to survivors in the country, taken by truck where possible, but due to the massive destruction, "the relief cargo may need to be airlifted," Byrs said.

WFP experts are meanwhile pouring over satellite images to estimate how many people have been affected by the disaster, Byrs said.

She said the worst-hit area was in "an agricultural zone that is home to between two and three million people."
WFP has been working in Nepal since 1964, and the agency had before the quake already been planning to assist some 500,000 people who do not have enough to eat.

The UN children's agency warned Sunday that the quake had left nearly one million youngsters in desperate need of assistance.

Promoted
Listen to the latest songs, only on JioSaavn.com
UNICEF cautioned that the thousands of children camping out in the open in the capital Kathmandu were particularly at risk of disease.

UNICEF said it was mobilising staff and sending two cargo flights with 120 tonnes of humanitarian supplies, including medical and hospital supplies, tents and blankets.