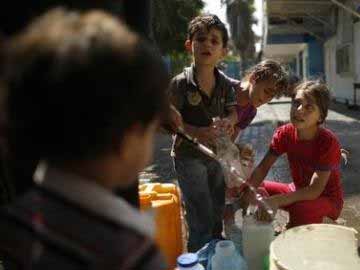 Geneva: More than 400 children have been killed in Israel's assault on Gaza, and almost a thousand times as many are traumatised and face an "extraordinarily bleak" future, the top UNICEF official in Gaza said on Tuesday.

Pernille Ironside, head of the field office run by the UN children's agency in Gaza, said rebuilding children's lives would be part of a much larger effort to reconstruct the Palestinian enclave once the fighting has stopped for good.

"How do we expect parents and caregivers to care for their children and to raise them in a positive and nurturing way when they themselves are barely functioning as humans? People have lost entire strands of their family in one blow.

"How can a society cope with this? This is a deep, deep, deep wound," she said by phone, addressing a UN news conference in Geneva.

By Aug. 4, 408 Palestinian children were reported to have been killed, 31 percent of all civilian casualties. More than 70 percent of the 251 boys and 157 girls killed were 12 or younger.

Even before the latest violence, Gaza's children were schooled in shifts because of a lack of schools and graduated into a job market with 59 percent youth unemployment.

"If you're over the age of seven, you've already lived through two previous wars," and the latest escalation was far worse than those in 2008-9 and 2012, Ironside said.

"It is an extraordinary thing to live through, and especially to survive and witness the use of incredibly damaging weapons that tend to slice people with terrible amputations and maimings, shredding people apart in front of children's eyes and in front of their parents as well," she said.

UNICEF estimates about 373,000 children have had some kind of direct traumatic experience and require immediate psycho-social support, she said.

"This is an incredible endeavour to embark on, and quite daunting for the teams that we already have on the ground. But of course we're committed to seeking that work through over the months and years that it will require."

Humanitarian workers were at their limit, she said, citing Israel's destruction of electric power supplies that had exacerbated an already parlous water supply situation by putting water pumping facilities out of action.

"There's only very limited amount of water available. It's used for drinking, which means there's insufficient water for hygiene. We see children coming out of these shelters with scabies, lice, all kinds of communciable diseases.

"Even worse is that in the communities outside of the shelters, most people have not had any access to water through the system for several weeks now. They are in a terrible state in terms of being able to access any kind of clean drinking water that's not contaminated by sewage."

That could lead to diarrhoea and the further deaths of children, particularly under-fives, she said.

Ironside estimated that just sheltering families whose homes had been destroyed would cost $40-50 million in the next year, which would be a small fraction of the total reconstruction cost.

"I would estimate we're looking at hundreds and hundreds and hundreds of millions of dollars. And certainly the question needs to be closely considered, who will pay for it: Is it the occupying power who inflicted it? Or is it the international community who are going to pay the bill again?"

But she said neither the international community nor the Palestinians would accept the rebuilding of Gaza on the same terms as before, and suggested Israel's tight control on building supplies coming into Gaza needed to be relaxed.

Promoted
Listen to the latest songs, only on JioSaavn.com
"The amount of time and resources just to coordinate one bag of cement are astounding. Is this where the resources of the United Nations should be placed, on the coordination and approval of minutia?"

Gaza officials say the war has killed 1,867 Palestinians, most of them civilians. Israel says 64 of its soldiers and three civilians have been killed since fighting began on July 8, after a surge in Palestinian rocket launches.
© Thomson Reuters 2014