How Michigan's Patient Zero, A Traveler, Infected 39 People With Measles 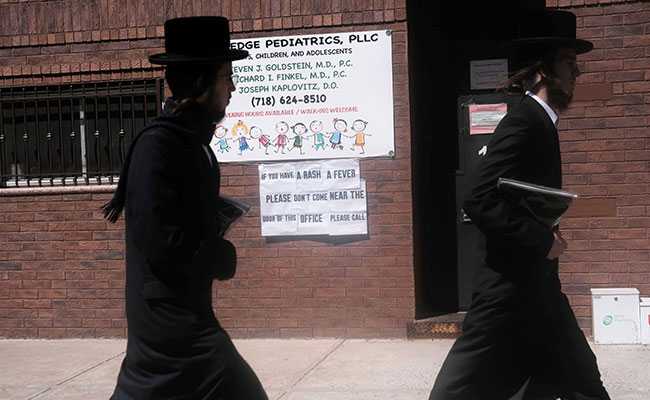 A sign warns people of Measles outbreak in Jewish community.

Last month, a traveler raising money for charity in Brooklyn's ultra-Orthodox Jewish community, drove through the night to Detroit - his next fundraising stop. He felt sick en route and saw a doctor when he got there. But the doctor, who had never seen measles, misdiagnosed the man's fever and cough as bronchitis.

Over the next two weeks, the traveler would become Michigan's Patient Zero, spreading the highly contagious respiratory virus to 39 people as he stayed in private homes, attended synagogue daily and shopped in kosher markets. His case offers a cautionary tale about how easily one of the most infectious pathogens on the planet spreads within close-knit communities - especially those whose members live, work and socialize outside the mainstream.

"Every one of our cases has had a link to the initial case," said Leigh-Anne Stafford, health officer for Oakland County, a Detroit suburb where all but one case was reported.

In the past five years, 75 percent of measles cases reported to the Centers for Disease Control and Prevention occurred in several insular communities, among them the Amish in Ohio, the Somali community in Minnesota, Eastern European groups in the Pacific Northwest and the Orthodox Jewish community in New York.

In the latest outbreak, the New York contagion has spread through Patient Zero and other travelers to predominantly Orthodox Jewish communities in Westchester and Rockland Counties in New York; Oakland County in Michigan, and Baltimore County in Maryland. On Friday, Connecticut officials said an adult contracted measles while visiting Brooklyn in late March. New Jersey officials are investigating possible links between 11 cases in the Ocean County area and those in New York.

"What's similar about all of these communities is that they live in proximity to each other and spend a lot of their time interacting with each other," said Daniel Salmon, a professor of international health at the Johns Hopkins Bloomberg School of Public Health and director of the school's Institute for Vaccine Safety. "That's what matters. Measles doesn't care what your cultural heritage is."

Many of these communities distrust government, avoid television and the Internet, and often rely on their own clinicians for medical care. In such a void, anti-vaccine misinformation has sometimes gained a foothold, deterring parents from fully vaccinating their children.

The traveler had come from Israel last November to Brooklyn, the epicenter of a measles outbreak, and stayed for about two months before going on to the Detroit area in early March, said Russell Faust, Oakland County's medical officer. The man told Michigan health officials he was visiting Orthodox communities in the United States to raise money for charity.

Feverish and coughing after his arrival, he saw a doctor, who prescribed antibiotics.

When the man called back to complain of a rash the next day, the doctor thought he was having an allergic reaction. But after the doctor thought more about it, he worried about the possibility of measles and decided to leave a voice message for the health department with the man's cellphone number. Health officials jumped on the case - but couldn't reach the man because of a problem with his cellphone.

They turned to Steve McGraw, head of Oakland emergency medical services, also a longtime member of the Detroit-area Hatzalah,the Orthodox community's emergency medical response group, an all-volunteer effort with deep ties to many families. McGraw alerted rabbinical leaders, then jumped in his car and drove to the neighborhood in look for the man's rental car, a blue sedan, knowing it would stand out among the minivans used by virtually every family.

Hatzalah members and rabbinical leaders also mobilized to search for the traveler, who was staying in a neighborhood guesthouse. When they found him a few hours later, the traveler was stunned. He told McGraw and the rabbi who found him that they had to be wrong since he believed he had had the measles.

"There is only one disease, and you have it," McGraw recalled saying, as one rabbi translated into Hebrew. "He put his head down and was very emotional. I could tell from the look on his face that he was devastated. He was doing the math in his head," counting all the people he had been in contact with, McGraw said.

The traveler, as it turned out, had had hundreds of contacts with community members that health officials needed to trace. He had stayed mostly in private homes in the areas of Oak Park and Southfield. He had visited synagogues three times a day to pray and study and frequented kosher markets and pizza parlors, among 30 locations in one week.

"This guy was walking around all over the community and contagious," McGraw said. "We knew we had a really significant exposure."

Measles virus is so infectious that if an unvaccinated person walks through a room up to two hours after someone with measles has left, there's a 90 percent chance the unvaccinated person will get sick. People can spread measles for four days before and four days after the telltale rash. Because measles is so infectious, at least 96 percent or more of a community need to be vaccinated to prevent risk of outbreak.

To get information out to the Orthodox community, health officials used its internal messaging system known as a calling post. Recorded voice messages ring on about 1,200 mobile phones. McGraw recorded a message that rabbinical leaders approved for delivery, the first of several that provided information about the disease and vaccination clinics.

Over the next few weeks, Janet Snider, a pediatrician for many Orthodox Jewish families, and Gedalya Cooper, an emergency medicine doctor, both members of the Hatzalah, visited people in their homes to diagnose and test them for measles.

The Council of Orthodox Rabbis of Greater Detroit issued an unequivocal statement, saying Jewish law obligated every community member to be "properly and fully vaccinated" according to the CDC. The agency recommends children get two measles, mumps and rubella (MMR) doses, starting with the first dose at age 12 through 15 months and the second dose at age 4 through 6 years.

"In order to protect and safeguard each and every individual within the larger community, every individual, family and institution must take the necessary precautions against anyone who chooses not to be vaccinated," the statement said.

The Hatzalah and rabbinical leaders helped the health department set up three clinics at one synagogue, immunizing nearly 1,000 people in one week. As of early April, health officials have given more than 2,100 vaccinations. Vaccine refusal does not appear to be a major factor in the Oakland County cluster, officials said.

In Michigan, at least, the close coordination between health officials and the religious community appears to have controlled the spread of the disease, which can cause severe complications including deafness, pneumonia, brain damage and death.

Now, with 555 measles cases in 20 states - the highest in five years - other localities are looking at that model. Hatzalah groups in other parts of the country are reaching out to county officials for advice on boosting vaccination within the Orthodox Jewish community, Faust said.

Oakland County had something else going for it: Measles outbreaks typically start with children. But Patient Zero had spent most of his time with adults, and most of the 39 cases are in adults. Many adults who got sick thought they had been vaccinated, but that turned out not to be the case.

"There are a fair number of nonimmunized or under-immunized adults," said Faust, the medical officer. Some of the adults infected also were born before 1957, when most people caught measles and are thought to have natural immunity.

Officials said that the risk remains high for those who are unvaccinated or under-vaccinated and who travel to communities here or abroad where measles cases are raging.

Gaps in vaccination coverage have led to a 20-year high in measles cases in Europe. Major outbreaks also are taking place in parts of the Middle East, Southeast Asia and Japan. More than 1,200 people have died in Madagascar. With spring break and summer vacations approaching, travelers visiting European countries with outbreaks, such as France and Italy, have a much higher chance of bringing infections back to "islands or pockets of vulnerability," said Saad Omer, an infectious disease expert at Emory University.

"Measles is a very unforgiving disease," he said. "Even if most people are vaccinated, that number may not be high enough."