UN launches its first ever surveillance drone in DR Congo 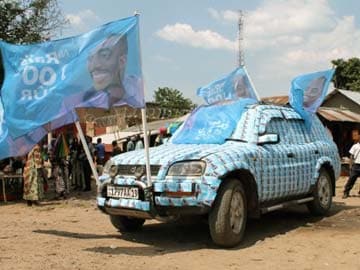 A car is decorated with pictures of Democratic Republic of Congo President Joseph Kabila.

Goma: The UN peacekeeping mission in the Democratic Republic of Congo on Tuesday officially launched a surveillance drone in the strife-torn northeast in the first such move by the United Nations.

The Italian-made pilotless aircraft was launched at 12:01 pm (1001 GMT) from the airport in Goma, capital of North Kivu province, at a media event attended by the chief of UN peacekeeping operations, Herve Ladsous and several diplomats.

The UN mission in the DR Congo, MONUSCO, currently has two such drones. According to a military expert in the capital Kinshasa, both aircraft began trial flights on Sunday.

The drones, which are unarmed and exclusively equipped for reconnaissance flights, are intended to help the United Nations to watch over North Kivu, a mineral-rich province prey to dozens of armed movements, which MONUSCO troops have been ordered to neutralise, including by force.

The aircraft will also be used to survey the porous borders between North Kivu and Rwanda and Uganda, in a bid to prevent these countries from providing support to groups inside DR Congo.

The United Nations accused both neighbouring countries of backing a powerful rebel group, the Movement of March 23 (M23), which surrendered on November 5 after a joint assault by the Congolese army and a new UN special intervention brigade with an unprecedented offensive mandate.

The governments in Kigali and Kampala denied the charges of backing the M23.

Promoted
Listen to the latest songs, only on JioSaavn.com
In the longer term, MONUSCO is due to be equipped with five drones built by Selex ES, a subsidiary of the Italian aeronautical and defence firm Finmeccanica. The UN mission counts on round-the-clock aerial surveillance by March next year.