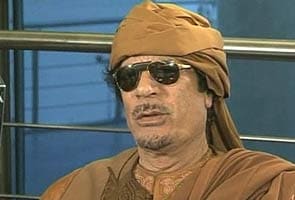 After days of often acrimonious debate, played out against a desperate clock, as Colonel Gaddafi's troops advanced to within 100 miles of the rebel capital of Benghazi, Libya, the Security Council authorized member nations to take "all necessary measures" to protect civilians, diplomatic code words calling for military action.

Diplomats said the resolution -- which passed with 10 votes, including the United States, and abstentions from Russia, China, Germany, Brazil and India -- was written in sweeping terms to allow for a wide range of actions, including strikes on air-defence systems and missile attacks from ships. Military activity could get under way within a matter of hours, they said.

Benghazi erupted in celebration at news of the resolution's passage. "We are embracing each other," said Imam Bugaighis, spokeswoman for the rebel council in Benghazi. "The people are euphoric. Although a bit late, the international society did not let us down."

There was no immediate comment from the Libyan government. But the vote, which came after rising calls for help from the Arab world and anguished debate in Washington, left unanswered many critical questions about who would take charge, what role the United States would play and whether there was still enough time to stop Colonel Gaddafi from recapturing Benghazi and crushing a rebellion that had once seemed likely to drive him from power. After the vote, President Obama met with the National Security Council to discuss the possible options, European officials said.

Speaking on a radio call-in show in Tripoli on Thursday, Colonel Gaddafi raised the level of urgency on the vote, saying that his forces would begin an assault on Benghazi that night.

"We will come house by house, room by room. It's over. The issue has been decided," he said, offering amnesty to those who laid down their arms. To those who continued to resist, he vowed: "We will find you in your closets. We will have no mercy and no pity."

"It's going to be tougher to stop Gaddafi today than it was a week ago," said James M. Lindsay, the director of studies at the Council on Foreign Relations. "The issue is not going to be settled in the skies above Benghazi, but by taking out tanks, artillery positions and multiple-launch rocket systems on the ground."

Mr. Lindsay said that would require helicopter gunships and other close-in support aircraft rather than advanced fighter planes. Other analysts said repelling Colonel Gaddafi's forces might require ground troops, an option that has been flatly ruled out by Secretary of State Hillary Rodham Clinton and other senior American officials.

A Pentagon official said Thursday that decisions were still being made about what kind of military action, if any, the United States might take with the allies against Libya. The official said that contingency planning continued across a full range of operations, including a no-fly zone, but that it was unclear how much the United States would become involved beyond providing support.

That support is likely to consist of much of what the United States already has in the region -- Awacs radar planes to help with air traffic control should there be airstrikes, other surveillance aircraft and about 400 Marines aboard two amphibious assault ships in the region, the Kearsarge and the Ponce.

The Americans could also provide signal-jamming aircraft in international airspace to muddle Libyan government communications with its military units.

A European diplomat said that Britain and France were still waiting to hear what role the United States would take in any military action in Libya. "One decision that needs to be made," he said, "is whether there will be a command and control operations in Britain or in France."

Beyond that, the diplomat said that officials in Britain, France and the United States were all adamant that Arab League forces take part in the military actions and help pay for the operations, and that it not be led by NATO, to avoid the appearance that the West was attacking another Muslim country.

The United States has played a complicated role in the debate over military involvement, initially expressing great reluctance about being drawn into another armed conflict in a Muslim country but subsequently unnerved by the reports of Colonel Gaddafi's gains.

But diplomats said the moral imperative of protecting civilians from Colonel Gaddafi and the political imperative of United States not watching from the sidelines while a notorious dictator violently crushed a democratic rebellion had helped wipe away lingering doubts.

Characterizing Colonel Gaddafi as a menacing "creature" lacking a moral compass, Mrs. Clinton said Thursday that the international community had little choice but to act. "There is no good choice here. If you don't get him out and if you don't support the opposition and he stays in power, there's no telling what he will do," Mrs. Clinton said from Tunisia on Thursday.

She went on to say Gaddafi would do "terrible things" to Libya and its neighbours. "It's just in his nature. There are some creatures that are like that." Her remarks, applauded by the studio audience where she appeared, amounted to the administration's most stridently personal attacks on the Libyan leader, echoing President Ronald Reagan's "mad dog of the Middle East."

The resolution -- sponsored by Lebanon, another Arab state, and strongly backed by France, Britain and the United States -- explicitly mentions the need to protect civilians in the rebel stronghold Benghazi, "while excluding an occupation force." It calls to "establish a ban on all flights in the airspace" and an immediate cease-fire.

Mrs. Clinton said Thursday that establishing a no-fly zone over Libya would require bombing targets in the country to protect planes and pilots. She said other options being considered included the use of drones and arming rebel forces, though not ground troops, an option that appeared to be ruled out Thursday by the State Department's highest-ranking career diplomat, Under Secretary William J. Burns.

The vote was also a seminal moment for the 192-member United Nations and was being watched closely as a critical test of its ability to take collective action to prevent atrocities against civilians. Diplomats said the spectre of former conflicts in Bosnia, Rwanda and Darfur, when a divided and sluggish Security Council was seen to have cost lives, had given a sense of moral urgency to Thursday's debate. Yet some critics also noted that a no-fly zone authorized in the early 1990s in Bosnia had failed to prevent some of the worst massacres there, including the Srebrenica massacre.

The resolution stresses the necessity of notifying the Arab League of military action and specifically notes an "important role" for Arab nations in enforcing the no-fly zone. Diplomats said Qatar and the United Arab Emirates were considering taking a leading role, with Jordan, Saudi Arabia and Egypt also considering participating.

The participation of Arab countries in enforcing a no-fly zone has been seen as a prerequisite for the United States, keen not to spur a regional backlash. But at least one Muslim country, Iran, expressed strong criticism. Mohammad Khazaee, the ambassador from Iran, told reporters Thursday that foreign military intervention in Libya set a dangerous precedent in the region.

Diplomats said debate on the resolution had been contentious, with Russia and China reluctant to support military intervention in a sovereign country. The German foreign minister, Guido Westerwelle, also opposed military action and called for tougher sanctions.

Promoted
Listen to the latest songs, only on JioSaavn.com
Security Council members said they were aware that they were in a race against time, with military units loyal to Colonel Gaddafi surrounding the strategically located town of Ajdabiya and massing for a push up the road to the rebel stronghold of Benghazi, 100 miles away. The Air Force chief of staff, Gen. Norton Schwartz, told a Senate panel that it would probably take "upwards of a week" to impose a no-fly zone over Libya. But French diplomats insisted Thursday that military action could proceed within hours of the resolution's being passed.

Mr. Obama had come under pressure in recent days to take action. France's foreign minister, Alain Juppé, came to New York to press for a draft resolution, while on Wednesday the French president, Nicolas Sarkozy, sent a letter to the Security Council saying that the world had only days, or even hours, to head off a Gaddafi victory.