Though exploiting a historical space like Chernobyl could infuse Ukraine's economy with tourism dollars and motivate developers to revive the sleepy towns surrounding the "dead zone," there are significant downsides, experts say. 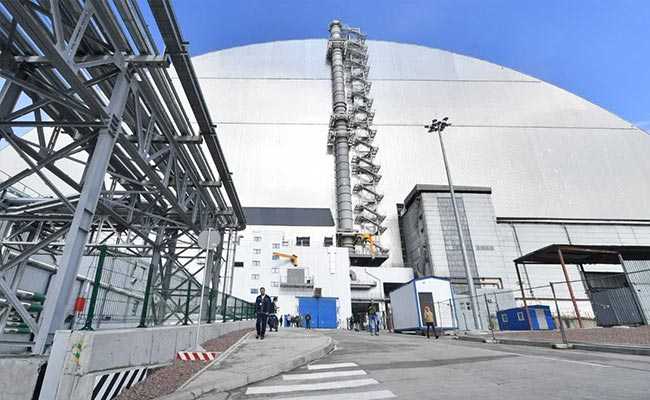 The tourists first started flocking to Chernobyl nearly 10 years ago, when fans of the video game S.T.A.L.K.E.R. wanted to see firsthand the nuclear wasteland they'd visited in virtual reality.

Next came those whose curiosity piqued when in 2016 the giant steel dome known as the New Safe Confinement was slid over the sarcophagus encasing nuclear reactor number four, which exploded in April 1986, spewed radiation across Europe and forced hundreds of thousands to flee from their homes.

Then in May, HBO's "Chernobyl" miniseries aired, and tourism companies reported a 30 to 40% uptick in visitors to the Chernobyl Exclusion Zone, abandoned and eerily frozen in time.

Now the Ukrainian government - capitalizing on the macabre intrigue - has announced that Chernobyl will become an official tourist site, complete with routes, waterways, checkpoints and a "green corridor" that will place it on the map with other "dark tourism" destinations.

"We must give this territory of Ukraine a new life," President Volodymyr Zelensky said during a visit to Chernobyl this week. "Until now, Chernobyl was a negative part of Ukraine's brand. It's time to change it."

Zelensky, who was inaugurated in May, signed a decree July 10 to kickstart the Chernobyl Development Strategy, which the president hopes will bring order to the 19-mile Exclusion Zone that has become a hotbed for corruption, trespassing and theft. At the nuclear facility and in the nearby town of Pripyat, wildlife has returned and now roams freely. Flora and fauna grow up around decaying homes, playgrounds and an amusement park. Letters, dinner tables and baby dolls remain where their owners abandoned them 33 years ago.

Radioactive dust still coats it all.

"Chernobyl is a unique place on the planet where nature revives after a global man-made disaster, where there is a real 'ghost town,' " Zelensky said during his visit. "We have to show this place to the world: scientists, ecologists, historians, tourists."

Though exploiting a historical space like Chernobyl could infuse Ukraine's economy with tourism dollars and motivate developers to revive the sleepy towns surrounding the "dead zone," there are significant downsides, experts say.

The grounds remain coated with plutonium, cesium, strontium and americium - radionuclides (atoms that emit radiation) that could pose potentially serious health risks to those who touch or ingest them. Some areas are more radioactive, and therefore more dangerous, than others.

"Chernobyl was the worst nuclear accident in human history," said Jim Beasley, an associate professor at the University of Georgia who has been studying wildlife in the Exclusion Zone since 2012. "Even though the accident occurred over 33 years ago it remains one of the most radiologically contaminated places on earth."

More than 30 people were killed in the immediate aftermath of the explosion, and officials are still debating the full extent of the longterm death toll in Ukraine and nearby countries where people grew sick with cancer and other illnesses.

The World Health Organization estimates total cancer deaths at 9,000, far less than a Belarusian study that put the death toll at 115,000, reported Reuters.

Today, radiation levels inside the Exclusion Zone vary widely from location to location, said Dr. T. Steen, who teaches microbiology and immunology at Georgetown's School of Medicine and oversees radiation research in organisms at nuclear disaster sites. Because of that, she advises anyone visiting to be educated and cautious while inside the Exclusion Zone, and to limit time spent there.

"The longer you're exposed, the more that future impact is," she said.

She advises visitors to the Exclusion Zone to wear clothes and shoes they are comfortable throwing away. If they're going to be touching or disturbing anything, she recommends a mask and gloves. Most importantly, Steen says, Chernobyl tourists should avoid plant life, and especially the depths of the forests.

Those areas were not cleaned in the aftermath of the disaster and remain highly contaminated by radiation. Research has showed that the fungus, moss and mushrooms growing there are radioactive. Eating or drinking from the area is not safe.

Those who stay on the paved pathways, which officials cleaned, are much less likely to absorb harmful toxins.

Generally speaking, Chernobyl can be safe, Steen said, "but it depends on how people behave."

And so far, the accounts of tourists behaving badly are abundant.

Timothy Mousseau, a biologist and University of South Carolina professor, has been studying the ecological and evolutionary consequences of radioactive contaminants on wildlife and organisms at Chernobyl for 20 years. He just recently returned from his annual, month-long trip to the Exclusion Zone and said he was shocked to see 250 tourists in street clothes wandering Pripyat.

Some hopped in bumper cars at the abandoned amusement park there to take selfies.

"Part of the reason people don't think twice about it is because there is this highly organized tourism operation," Mousseau said. "A lot of people don't give it a second thought."

He is concerned that the government's tourism campaign could only make that worse.

"The negative aspects that are being completely ignored are the health and safety issues of bringing this many people, exposing this many people to what is a small risk, albeit a significant risk, to this kind of contamination," Mousseau said. "The more traffic there is, the most dust there is, and the dust here is contaminated."

But Mousseau's worries, and the anxieties of his colleagues, extend beyond health factors.

For decades, biologists, ecologists and medical researchers have been studying the mostly undisturbed expanse that is the Exclusion Zone. They've studied DNA mutations in plants and insects, birds and fish. As larger mammals, like moose, wolves and fox, have slowly re-occupied the surrounding forests, biologists have searched for clues about the ways short-term and long-term radiation exposure have altered their health.

Scientifically, there is no place on earth like Chernobyl. Beasley, who studies wolves there, calls it a "living laboratory." An influx of humans - especially reckless ones - could destroy it.

"This is really the only accessible place on the planet where this kind of research can be conducted at a scale both spatial and temporal that allows for important scientific discovery," Mousseau said. "Given increased use of radiation in technology and medicine, in going to Mars and space, we need to know more about radiation and its effects on biology and organisms."

"And Chernobyl provides a unique laboratory to do this kind of research," he said.

Tourism's negative footprint in the Exclusion Zone is not theoretical, either.

They are leaving behind trash, rummaging through abandoned homes and buildings and, in Mousseau's experience, stealing his research equipment. Cameras he has hidden in the depths of the most radioactive parts of the zone to capture the wildlife he studies have been vandalized or gone missing, he said.

"It's something that absolutely astounds me," he said.

Theoretically, more government oversight at Chernobyl could help curb this kind of interference, especially if a financial investment in the zone will help preserve the ghost town there and bring in more guards and checkpoints to patrol who comes and goes.

None of that will prevent tourists from disturbing Chernobyl's spirit.

"I think it is important to not lose sight of the fact that Chernobyl represents an area of tremendous human suffering," Beasley said, "as hundreds of thousands of people were forever displaced from their homes or otherwise impacted by the accident."