After the stunt, four activists stood atop the fire engine which had a banner saying "Stop funding climate death." The steps of the Treasury were soaked in red paint. 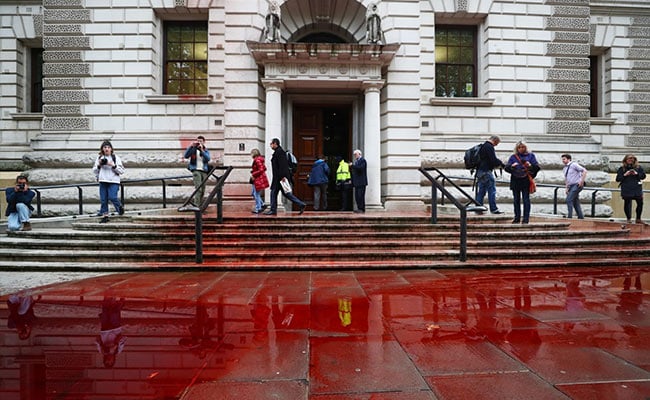 Climate change activists used a fire engine to spray red paint at the facade of the British finance ministry on Thursday in an attempt to draw attention to what they said was the government's failure to avert a looming climate cataclysm.

The activists drove up to the British Treasury in a fire engine and sprayed red paint through the hose onto the building, though at one point they lost control of the hose.

After the stunt, four activists stood atop the fire engine which had a banner saying "Stop funding climate death." The steps of the Treasury were soaked in red paint.

Extinction Rebellion said its activists had sprayed 1,800 litres of fake blood at the Treasury. The activists also sprayed the slogan "Stop funding climate death" on the walls of the building. 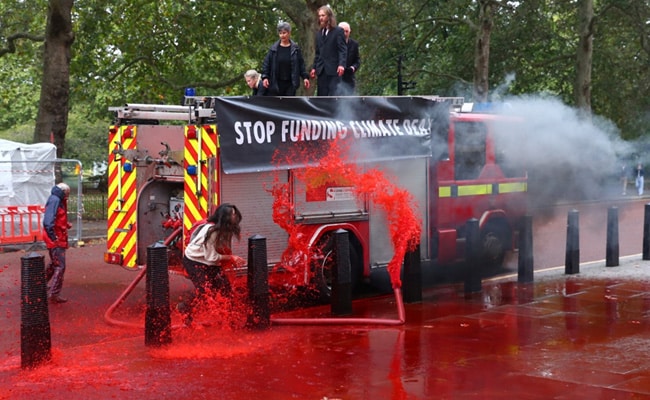 "The Treasury has been frustrating efforts by other government departments to take action against climate change because it cares only about economic growth," one of the activists, named Ben, told Reuters.

"It doesn't see that eternal economic growth leads to climate death," Ben said. "The red symbolises the people dying now in the global south and also the people who are going to start dying from climate change all around the world if we do nothing."

Police said they arrested four people on suspicion of criminal damage and that some roads had been closed. At the scene, police puzzled over what to do with the fire engine as the driver removed the keys.

The fire engine was purchased on eBay, the activists told Reuters.

The group disrupted London with 11 days of protests in April that it cast as the biggest act of civil disobedience in recent British history. Iconic locations were blocked, the Shell building defaced, trains stopped and Goldman Sachs targeted.

The British Treasury, which traces its history back to William the Conqueror, is located in a grand building between Buckingham Palace and the British parliament.

(Except for the headline, this story has not been edited by NDTV staff and is published from a syndicated feed.)
Comments
UK Finance MinistryUK Ministry Painted RedExtinction Rebellion