"Now Omicron is so prevalent, these measures are having limited impact on the growth in cases, while continuing to pose significant costs on our travel industry," Boris Johnson said. 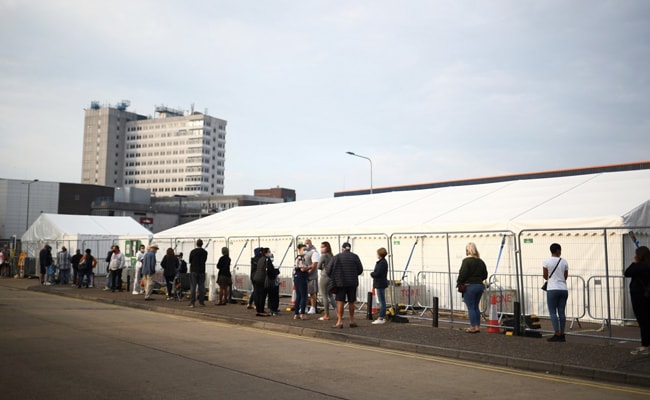 UK is already among the worst hit countries in Europe by the pandemic withvirus deathsof nearly 150,000

The UK government announced changes Wednesday to Covid travel rules for England, scrapping the need for visitors to have pre-departure tests and quarantine on arrival until they have tested negative.

The new arrangements under which arrivals will be able to take a lateral flow in the first two days after travel rather than a more expensive PCR test come as official data showed one in 15 people in England were infected with coronavirus in the last week of 2021.

The UK, already among the worst hit countries in Europe by the pandemic with virus deaths of nearly 150,000, has seen a fresh surge in cases due to the arrival of the Omicron variant in late November.

"Now Omicron is so prevalent, these measures are having limited impact on the growth in cases, while continuing to pose significant costs on our travel industry," he told MPs.

"So I can announce that in England from 4:00 am (0400 GMT) on Friday we will be scrapping the pre-departure test, which discourages many from travelling...."

PM Johnson noted only those testing positive on lateral flow devices would be required to then do a further PCR test "to help us identify any new variants at the border".

However, he also announced testing rules for the general population in England without symptoms would be eased to help mitigate the fallout from the record infection levels.

Asymptomatic people who test positive will no longer require a confirmatory PCR test from January 11.

Instead, those who receive a positive result on a lateral flow device will be required to self-isolate immediately, without getting the PCR confirmation.

A similar system will be rolled out in Scotland and Wales from Thursday.

The Office for National Statistics (ONS) earlier released its latest infection survey, showing more than one in 20 people had Covid-19 in the week ending December 31 in Britain -- its highest infection rate recorded during the pandemic.

An estimated 3.7 million people had the virus, up from 2.3 million the previous week, according to the ONS, which is seen as one of the most reliable counts as it randomly samples the population.

The unprecedented levels were highest in London where as many as one in 10 people had it.

"#COVID19 infection rates continued to increase across all age groups in England... with the highest rates still seen in school age children and young adults," the ONS said.

In Scotland, Wales and Northern Ireland, where devolved governments have reimposed some restrictions in recent weeks, rates were slightly lower at between one in 20 and one in 25 people.

Despite the unprecedented numbers, Johnson has opted not to introduce tougher restrictions in England, arguing the rising levels of hospitalisations and serious illness do not yet require more measures.

He has instead turned to so-called "plan B" measures -- mandating mask-wearing in most settings and advising people to work from home if possible -- while ramping up the vaccine booster programme.

It has seen nearly 60 percent of over-12s so far get a third dose.

"This government does not believe we need to shut down our country again," he told MPs.

"Instead we are taking a balanced approach, using the protection of the boosters and the Plan B measures to reduce the spread of the virus,"

But other UK regions have tightened rules, with devolved governments in Edinburgh, Cardiff and Belfast all rolling out post-Christmas curbs on socialising and large events.

Scottish First Minister Nicola Sturgeon said on Wednesday the measures there, which have included closing nightclubs and limiting the size of gatherings, would remain in place until at least mid-January.