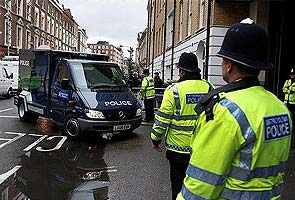 London: One of two suspects shot by the UK police at the scene of last week's terror attack on a London street in which a British soldier was beheaded has been charged with the murder.

22-year-old Michael Adebowale has been remanded in custody to appear at Westminster Magistrates' Court today. The second suspect, Michael Adebolajo, remains under arrest at a London hospital.

25-year-old Drummer Lee Rigby was stabbed to death in a street attack in Woolwich, south-east London, on May 22.

"Following the release of Michael Adebowale from hospital, we have authorised the police to charge him with the murder of Drummer Rigby. We have also authorised police to charge him with possession of a firearm, contrary to section 16A of the Firearms Act 1968," said Sue Hemming, head of the Crown
Prosecution Service (CPS) Special Crime and Counter-terrorism Division.

"There is sufficient evidence to prosecute Michael Adebowale and it is in the public interest to do so... This man is now charged with serious criminal offences and he has the right to a fair trial. It is extremely important that nothing should be reported which could prejudice this trial," she added.

The CPS said it was continuing to advise police in relation to the other suspects arrested during their investigation into Drummer Rigby's death.

Results of a post-mortem examination released yesterday found that the soldier died of "multiple incised wounds".

Promoted
Listen to the latest songs, only on JioSaavn.com
Police across Britain have arrested eight other people in connection with the investigation so far, six of whom have been bailed and two released without charge.