Ashamed by the killing of British soldier, says family of suspect 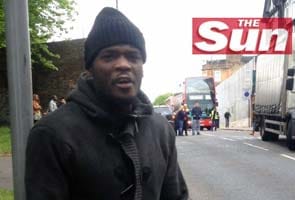 London/New York: The family of the suspected killer of a British soldier on a London street condemned the attack as senseless and distanced itself from the murder which has provoked an anti-Muslim backlash.

Lee Rigby, a 25-year-old veteran of the Afghan war, was butchered in broad daylight by two men who said they killed him in the name of Islam last week.

Police shot and wounded the assailants, both Britons of Nigerian descent, at the scene of the crime which has prompted questions about the security services' ability to prevent attacks of this kind.

In their first public remarks since the murder on Wednesday, relatives of one of the suspects, Michael Adebolajo, a 28-year-old British-born convert from a Christian Nigerian family, said they felt ashamed and horrified.

"Nothing we say can undo the events of last week," the family said in a statement.

"However, as a family, we wish to share with others our horror at the senseless killing of Lee Rigby and express our profound shame and distress that this has brought on our family."

Security services have been in the spotlight over what they knew about the two men's activities, particularly after it emerged Adebolajo was detained in Kenya in 2010 on suspicion of seeking to train with an Al Qaeda-linked group in Somalia.

Britain's ITV News channel reported that Adebalajo - who went by the nickname Mujahid - warrior - after taking up Islam as a teenager - and his family were approached by security services MI5 and MI6 who tried to recruit him as an informant.

It quoted his brother in law, James Thompson, as saying Adebolajo changed dramatically after his detention in Kenya where he said he was tortured and felt abandoned by his government.

"We contacted the British government and essentially, they refused to do anything and the Kenyans were saying they were going to kill him, behead him. We had clear proof that he was being tortured ... violently and sexually," Thompson said.

"I would say he's always been different since then. You could almost say he's a changed man in certain ways. He was a lot quieter and quite bitter towards the fact that he wasn't getting any help from anyone."

Sources close to the investigation have told Reuters the attackers were known to Britain's MI5 internal security service. Adebolajo had handed out radical Islamist pamphlets, but neither of the two men was considered a serious threat, sources said.

That has intensified calls for Britain's spy agencies to explain what they knew about the suspect and whether they could have done more to prevent Rigby's killing.

Police have arrested 10 people in connection to the murder. The second man shot and arrested at the scene of the crime, Michael Adebowale, 22, was discharged from hospital on Monday and moved into police custody where he was arrested on a separate charge of the attempted murder of a police officer.

The murder has galvanised Britain's small but noisy far-right movement, with more than 1,000 protesters shouting "Muslim killers, off our streets" marching through central London on Monday.

Promoted
Listen to the latest songs, only on JioSaavn.com
In the northeastern city of Grimsby at the weekend, unidentified attackers threw fire-bombs at a mosque. Similar attacks happened in southern England last week.