The 10-foot bronze statue was unveiled in Smethwick High Street to commemorate the 100th anniversary of the end of World War I in November 1918, also referred as the Great War. 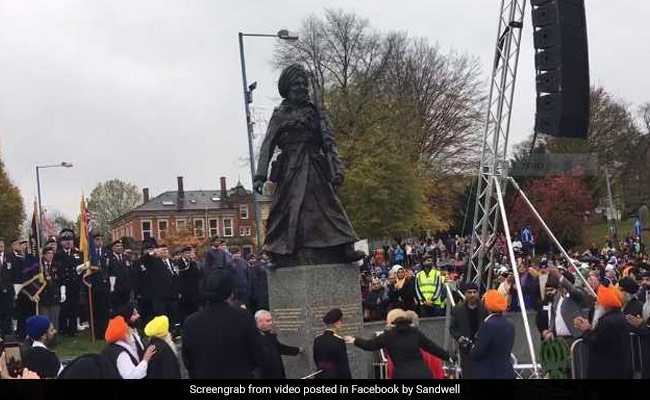 The statue stands on a granite plinth with inscriptions naming the regiments in which soldiers served.

A new sculpture in honour of Indian soldiers who fought during World War I was unveiled in the town of Smethwick in the West Midlands region of England on Sunday.

Guru Nanak Gurdwara Smethwick had commissioned the "Lions of the Great War" monument, which depicts a turbaned Sikh soldier, to honour the sacrifices made by millions of South Asian service personnel of all faiths who fought for Britain in the world wars and other conflicts as part of the British Indian Army.

"We are very proud to be bringing this memorial to Smethwick High Street to honour the sacrifice of all those brave men who travelled thousands of miles to fight for a country that wasn't their own," said Jatinder Singh, President of Guru Nanak Gurdwara Smethwick.

The 10-foot bronze statue was unveiled in Smethwick High Street to commemorate the 100th anniversary of the end of World War I in November 1918, also referred as the Great War.

The new "Lions of the Great War" monument has been placed between the High Street and Tollhouse Way in the town of Smethwick as part of a community project and collaboration between the gurdwara and the local Sandwell Council.

The gurdwara donated around 20,000 pounds for the sculpture, with the council investing in creating the public space with seating and lighting to house the new monument.

"It's so important we remember the sacrifices made by people for our country," said Councillor Steve Eling, Leader of Sandwell Council.

Designed by local West Midlands artist Luke Perry, the statue stands on a granite plinth with inscriptions naming the regiments in which South Asian soldiers served during the Great War.

"When I realised more than 1.5 million Indian soldiers had been sent to World War I, I just could not understand why their contribution had been ignored for so long in this country," said Luke Perry.

"Indians of all religions fought in the war and we are such a diverse multicultural country in part because of the sacrifices they made, so this is a wonderful statement which will be perfect for the Commonwealth Games and everything they represent," he said, in reference to the 2020 Commonwealth Games to be held in Birmingham, just west of Smethwick.

The unveiling of the statue today comes just a week before Armistice Day on November 11, marked annually in an elaborate wreath-laying ceremony at the Cenotaph in central London led by Queen Elizabeth II, as well as other smaller events around the country.

Earlier this week in the House of Commons, British Prime Minister Theresa May had paid tribute to the Indian soldiers who had fought as part of the British Indian Army.

"Over 74,000 soldiers came from undivided India and lost of their lives; 11 of them won the Victoria Cross for their outstanding bravery and played a crucial role in the war across multiple continents," she said on Wednesday, when she also pledged to adorn a khadi poppy in honour of these soldiers.

The Poppy Appeal is an annual fundraising campaign for war veterans held in the lead up to Armistice Day, with politicians and members of the public across the country wearing a cloth-based poppy on their lapels as a sign of respect for the war dead.

A khadi version of the poppy was launched by Indian-origin peer Lord Jitesh Gadhia and the Royal British Legion for the first time this year as an "evocative symbol" of undivided India's contribution to the war effort.