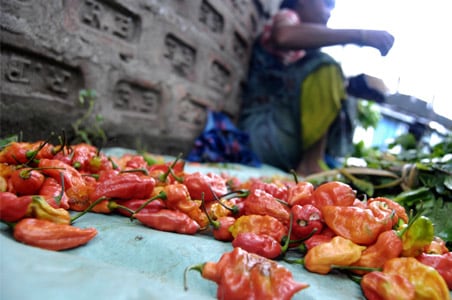 The record ofBhut Jolokia chilli grown in India's north-east has been threatened by the developmentof a new chilli in Britain which is more fiery and has a higher Scovillerating.

Bhut Jolokia isreportedly being used by the Indian army to make hand grenades to immobilizeterror suspects. The Scoville scale is used to measure the heat of peppers.

It measures 1,041,427on the Scoville scale, while the new chilli developed in Lincolnshire has aScoville rating of 1,067,286 in tests conducted at Warwick University.

The Lincolnshirevariety is named Infinity for its "never-ending" burn, which cannotbe quelled by even the best antidote, milk.

Chilli-grower WoodyWoods, 37, a resident of Grantham, told the media, "It is like eatingred-hot coal. To grow such a burning hot chilli in our climate isunbelievable."

He and his friendMatt Simpson, 38, bred the Infinity in a greenhouse by crossing existingvarieties and hope to market the seeds later this year.