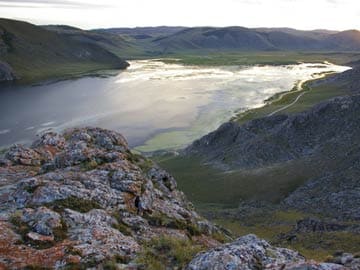 The genome of a young boy buried at Mal'ta near Lake Baikal in eastern Siberia some 24,000 years ago has turned out to hold two surprises for anthropologists.

The first is that the boy's DNA matches that of Western Europeans, showing that during the last Ice Age people from Europe had reached farther east across Eurasia than previously supposed. Although none of the Mal'ta boy's skin or hair survive, his genes suggest he would have had brown hair, brown eyes and freckled skin.

The second surprise is that his DNA also matches a large proportion - some 25 percent - of the DNA of living Native Americans. The first people to arrive in the Americas have long been assumed to have descended from Siberian populations related to East Asians. It now seems that they may be a mixture between the Western Europeans who had reached Siberia and an East Asian population.

The Mal'ta boy was aged 3 to 4 and was buried under a stone slab wearing an ivory diadem, a bead necklace and a bird-shaped pendant. Elsewhere at the same site some 30 Venus figurines were found of the kind produced by the Upper Paleolithic cultures of Europe. The remains were excavated by Russian archaeologists over a 20-year period ending in 1958 and stored in museums in St. Petersburg, Russia.

There they lay for some 50 years until they were examined by a team led by Dr. Eske Willerslev of the University of Copenhagen. Willerslev, an expert in analyzing ancient DNA, was seeking to understand the peopling of the Americas by searching for possible source populations in Siberia. He extracted DNA from bone taken from the child's upper arm, hoping to find ancestry in the East Asian peoples from whom Native Americans are known to be descended.

But the first results were disappointing. The boy's mitochondrial DNA belonged to the lineage known as U, which is commonly found among the modern humans who first entered Europe some 44,000 years ago. The lineages found among Native Americans are those designated A, B, C, D and X, so the U lineage pointed to contamination of the bone by the archaeologists or museum curators who had handled it, a common problem with ancient DNA projects.

"The study was put on low speed for about a year because I thought it was all contamination," Willerslev said.

His team proceeded anyway to analyze the nuclear genome, which contains the major part of human inheritance. They were amazed when the nuclear genome also turned out to have partly European ancestry. Examining the genome from a second Siberian grave site, that of an adult who died some 17,000 years ago, they found the same markers of European origin. Together, the two genomes indicate that descendants of the modern humans who entered Europe had spread much farther east across Eurasia than had previously been assumed and occupied Siberia during an extremely cold period starting 20,000 years ago that is known as the Last Glacial Maximum.

"We estimate that 14 to 38 percent of Native American ancestry may originate through gene flow from this ancient population," he and colleagues wrote in an article published Wednesday in the journal Nature.

A European contribution to Native American ancestry could explain two longstanding puzzles about the people's origins. One is that many ancient Native American skulls, including that of the well-known Kennewick man, look very different from those of the present-day population. Another is that one of the five mitochondrial DNA lineages found in Native Americans, the lineage known as X, also occurs in Europeans. One explanation is that Europeans managed to cross the Atlantic in small boats some 20,000 years ago and joined the Native Americans from Siberia.

Willerslev thinks it more likely that European bearers of the X lineage had migrated across Siberia with the ancestors of the Mal'ta culture and joined them in their trek across the Beringian land bridge.

He said his finding does not solve the much disputed question of when the Americas were first settled. Archaeologists long believed the people of the Clovis culture, dated from 13,000 years ago, were the first Americans, but several recent finds point to an earlier date.

"We need the sequencing of more ancient genomes to address this question," Willerslev said.

The Mal'ta people built houses that were partly underground, with bone walls and roofs made of reindeer antlers. Their culture is distinguished by its many art objects and its survival in an unforgiving climate.

"There was a lot of surprise and some skepticism, as is often the case in science toward new findings," said Dr. Dennis H. O'Rourke, an anthropologist at the University of Utah who works on ancient DNA and the North American Arctic.

O'Rourke said the result would prompt a search for more ancient DNA from Siberia in order to provide a better context for Willerslev's reconstruction of early American origins.

"I think it's a very important and really interesting result, but it is from a single individual," he said.

Theodore G. Schurr, an anthropologist at the University of Pennsylvania, said Willerslev had provided an interesting new perspective on Native American origins that helped explain the presence of the mitochondrial X lineage in North America and enlarged the understanding of population history in Siberia. But the time and place of the East-West population mixing adduced by Willerslev is not yet clear, he said.

Promoted
Listen to the latest songs, only on JioSaavn.com
Willerslev sees this as one possible scenario, another being that mitochondrial DNA lineages are easily lost through genetic drift, the random change in DNA patterns through the generations.

"One has to be careful setting up detailed geographical scenarios at this stage," Willerslev said.
© 2013, The New York Times News Service