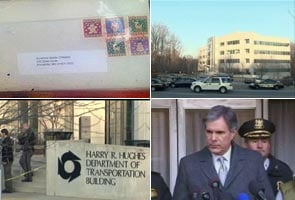 Hanover: A disgruntled "lone wolf" griping about highway signs mailed a small package to Maryland's Democratic governor and the parcel ignited when someone in the state mailroom unzipped it, shooting out a tiny flame that singed the worker's fingers.

About 15 minutes later Thursday, a second worker was injured opening a similar package at a state government building 20 miles away.

Soon after, mailrooms across Maryland were cleared and two other suspicious packages uncovered, though they turned out to be a toner cartridge and laptop batteries.

Explosive material wasn't found in either package that ignited and authorities aren't sure if any other dangerous packages are out there, but mailroom workers were expected back at work Friday. They'll have pictures of the packages and were advised to be vigilant about anything suspicious.

Governor Martin O'Malley said the mailing sent to him complained about highway signs that urge motorists to "Report Suspicious Activity" and gives an 800 number.

A worker ripped the pull tab on the first package, addressed in typeface to the recently re-elected governor and adorned with holiday stamps, in Annapolis where mail for O'Malley's office is routinely checked. It produced a "puff of smoke and a sulphur-type smell, like if you would strike a match."

The building is just blocks from the governor's office, which is inside the State House in the heart of the capital.

The package contained a message about the state's terrorism tip line, which is widely shown on overhead highway signs.

The state also uses them to post information about missing children and, to the ire of some drivers, it added real-time traffic estimates to major highways in March. Some commuters complained drivers slowed to read the signs and backed up traffic. At O'Malley's request, the state studied the issue and removed the real-time postings from one congested area on the Capital Beltway.

The second fiery package was sent to state Transportation Secretary Beverley Swaim-Staley in Hanover, said US Rep CA Dutch Ruppersberger, D-Md, although he was not certain whether her name was written on it.

Ruppersberger said a return address on one of the packages turned out to be a Washington parking garage. Ruppersberger, a member of the House Intelligence Committee who was briefed on the mailings, said there were no apparent links to terrorist organizations.

"I believe this is what we call in intelligence a lone wolf situation, involving an individual who for whatever reason was upset with state government," Ruppersberger said.

The woman who burned her fingers at the transportation agency building was taken to a hospital, as were three other people who were concerned because they were near the package when it was opened.

Cate Conroy, acting director of outreach and advocacy for the Veterans Affairs Department, where the governor's mailroom is housed, was in the building when the package was opened. She said employees calmly left while reports of smoke were investigated.

"It happened quite quietly, actually," Conroy said, adding that employees were allowed back into the building a few hours later.

State police were preparing photographs of the two packages for agency mailrooms, and will provide steps that workers should take if they find something, spokesman Greg Shipley said.

The FBI's joint terrorism task force was assisting in the investigation. A US Homeland Security Department official said the department was aware of what happened and was monitoring. One of the packages would most likely be taken to an FBI lab at Quantico, Va., to be examined, state fire marshal William Barnard said.

Postal inspectors have identified 13 dangerous devices since 2005, and only one person was injured, according to the US Postal Service. Both packages were sent by mail and the agency is also investigating.

In 2001, as the nation was still reeling from the 9/11 attacks, letters containing anthrax were sent to lawmakers and news organizations. Postal facilities, US Capitol buildings and private offices were shut for inspection and cleaning by workers in hazardous materials suits. The anthrax spores killed five people and sickened 17.

O'Malley, speaking after a Maryland Association of Counties dinner, said he had talked with one of the workers injured by the packages and left a message for the other and they were doing fine.

"I think it just underscores how whether it's the mail or whether it's the subway system or an airline, in this age ... you just have to be very, very vigilant because our openness and the freedom with which we communicate and with which we travel can be used as weapons against us," he said.
Comments
Mail BombsFiery packagesUS government offices