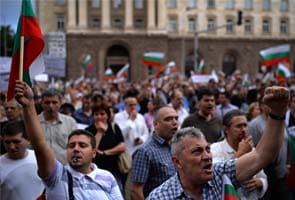 Others received medical attention at the scene after riot police broke up a blockade of parliament by around 2,000 protesters that only ended at around 3:30 am (0030 GMT), an AFP journalist on the ground said.

Around 100 ministers, MPs and journalists were trapped inside for more than eight hours. The building was fully emptied by 5:00 am (0200 GMT) and protesters' barricades made of park benches, garbage containers and paving stones were dismantled.

Protests have been held in Sofia every evening since June 14 by thousands of people fed up with poverty and corruption. They are calling for the government to resign, but until now the demonstrations had been peaceful.

The new government backed by the Socialists and headed by non-partisan Prime Minister Plamen Oresharski has only been in office following elections in May.

Promoted
Listen to the latest songs, only on JioSaavn.com
The previous right-wing administration of Boyko Borisov resigned in February after nationwide protests that saw eight people set themselves on fire, six of whom died.

"Order must be guaranteed. Lawmakers cannot be turned into targets, their life and health cannot be put in danger," speaker of parliament Mihail Mikov said late Tuesday.