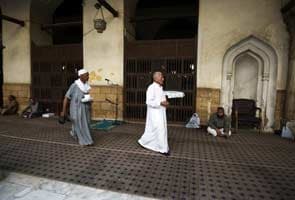 Cairo: A television series depicting a revered Islamic figure has caused a stir in the Arab world with thousands saying the show must be stopped because they believe such depictions are forbidden by Islam.

The historical drama, "Omar", tells the story of Omar Ibn al-Khattab, a close companion of Prophet Mohammed and influential ruler who oversaw the radical expansion of the Islamic empire in the 7th century.

The show has been at the centre of a controversy pitting Islamic conservatives against reformists.

The series is being aired during the holy month of Ramadan, when television viewing in the region peaks and advertisers pour large chunks of their budget into the small
screen's high season.

Saudi producers, the Middle East Broadcasting Centre (MBC), say it is the largest ever Arabic production, with 30,000 actors and a technical team from 10 different countries who toiled 300 days to make the 31-part series.

Al-Azhar, Sunni Islam's main seat of learning based in Cairo, has issued a fatwa against the series saying that portrayals of Prophet Mohammed and his companions are forbidden.

Although visual depictions are not explicitly banned in the Koran, Sunni scholars have generally agreed that personifications of religious figures are banned because it
can lead to idolatry, which is strictly forbidden.

Thousands have taken to social networking sites to denounce the series and call for it to be pulled off the air.

"The symbols of the Ummah (nation) are a red line," said one Facebook user on a page called "No to airing Omar."

The actors "will tarnish the image (of the prophets and companions) through their roles in other films and series and plays," another said.

One page showed the actors' faces with the text "Shame on Muslims!" underneath in a large red font.

But the show's producers say they received support from several leading clerics who also reviewed the historical accuracy of the series, including prominent Egyptian cleric Sheikh Yousef al-Qaradawi.

Promoted
Listen to the latest songs, only on JioSaavn.com
Omar Ibn al-Khattab was the second Caliph of Islam and one of the 10 close companions of Prophet Mohammed who were promised paradise, and was instrumental in the spread of Islam.