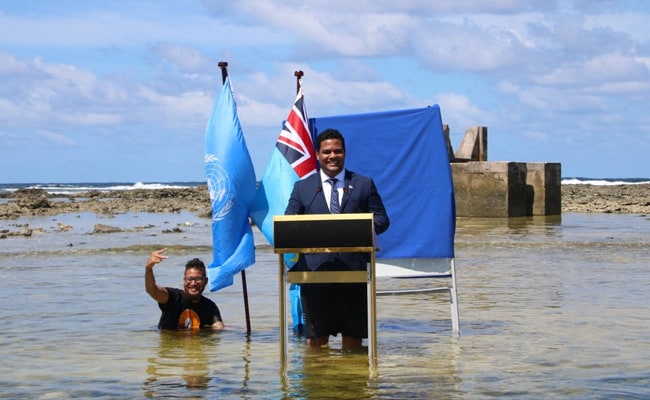 The video shows Tuvalu Foreign Minister Simon Kofe standing in a suit and tie in the sea.

Tuvalu's foreign minister has given a speech to the United Nations climate conference in Glasgow standing knee-deep in seawater to show how his low-lying Pacific island nation is on the front line of climate change.

Images of Simon Kofe standing in a suit and tie at a lectern set up in the sea, with his trouser legs rolled up, have been shared widely on social media, drawing attention to Tuvalu's struggle against rising sea levels.

"The statement juxtaposes the COP26 setting with the real-life situations faced in Tuvalu due to the impacts of climate change and sea level rise and highlights the bold action Tuvalu is taking to address the very pressing issues of human mobility under climate change," Kofe said of his video message to the conference.

‘We're actually imagining a worst-case scenario where we are forced to relocate or our lands are submerged,' Simon Kofe, foreign minister of the Pacific island nation of Tuvalu told Reuters after recording a speech for #COP26 standing knee-deep in the sea https://t.co/9buTmNPLzApic.twitter.com/JO9Chupi3M

The video was shot by public broadcaster TVBC at the far end of Fongafale, the main islet of the capital Funafuti, a government official said.

It is due to be shown at the climate summit on Tuesday and comes as regional leaders push for more aggressive action to limit the impact of climate change.

Many big polluters have vowed to intensify their carbon cuts over coming decades with some aiming for net zero carbon emissions by 2050.

But Pacific Island leaders have demanded immediate action, pointing out that the very survival of their low-lying countries is at stake.