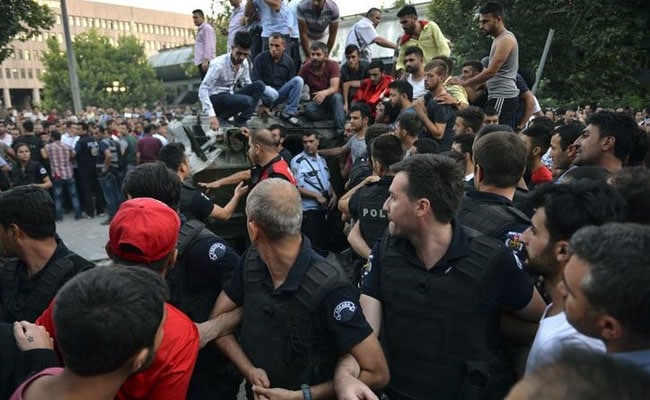 Turkish policemen cordon up around a military vehicle in Ankara, Turkey on July 16, 2016. (Reuters)

ISTANBUL: Close to 200 unarmed soldiers at the Turkish military headquarters have surrendered after a coup attempt, the state-run Anadolu news agency reported on Saturday.

An email from the Turkish military General Staff's press office address said on Saturday the faction of officers behind an attempted military coup overnight was still determinedly fighting all those who try to oppose it.

The statement came as around 50 soldiers involved in an attempted military coup in Turkey surrendered on one of the bridges across the Bosphorus in Istanbul on Saturday, abandoning their tanks with their hands raised in the air, live footage on CNN Turk showed.

A Reuters witness earlier saw tens of other pro-coup soldiers surrendering to armed police after being surrounded in Istanbul's central Taksim square.

Calling itself the Peace at Home Movement, the faction also called on people to stay indoors for their own safety.