Tunisia: A mock funeral and protests against Government 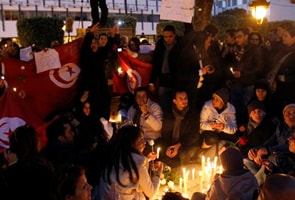 Tunis: Protesters staged a mock funeral in the centre of Tunis on Sunday in honour of the man whose suicide triggered the popular uprising that overthrew Tunisian President Zine El Abidine Ben Ali.

Mohamed Bouazizi, 26, died after he set himself on fire in the central city of Sidi Bouzid last month to protest against official harassment under Ben Ali's regime.

His self-immolation triggered the protests that forced the autocratic leader from power.

Protesters carried a makeshift coffin that was draped in a Tunisian flag as a symbol of those who died while taking part in the uprising.

The mock funeral was part of a day of protests in which more than 200 people from around Tunisia descended on the capital to join demands to rid the interim government of members of the old regime.

Many protesters had walked or hitchhiked in from the North African country's provinces, including some from Sidi Bouzid.

Earlier on Sunday, the demonstrators broke down barbed wire barriers to rally outside the prime minister's office, some waving photos of Bouazizi and others killed in the unrest.

Soldiers and police could only look on and stand guard at the doorway of the office as the protesters chanted and staged sit-ins.

Other countries in the region have experienced similar rallies and self-immolations after what some are calling the "Jasmine Revolution," after the country's national flower.

The UN human rights chief, Navi Pillay, has estimated more than 100 deaths have occurred during the unrest in Tunisia since mid-December and is sending an assessment team to the country.

Prime Minister Mohamed Ghannouchi, a longtime Ben Ali ally, has promised to quit politics after elections that are to be held as soon as possible amid protests by citizens still angry that the government is riddled with officials linked to the ousted regime.

On Sunday, Tunisia's official news agency said police have placed two former allies of Ben Ali under house arrest and are looking for a third.

The TAP agency said Senate president Abdallah Kallel was placed under house arrest. He was stopped from leaving the country after Ben Ali fled to Saudi Arabia on January 14 after weeks of street protests.